It's hunting season – for sea mines

In late summer, Vattenfall will be sending a ship to investigate what might be lurking down on the sea floor – more precisely, in the North Sea and Baltic Sea areas where Vesterhav Syd and Nord and Kriegers Flak offshore wind farms are due to be built. 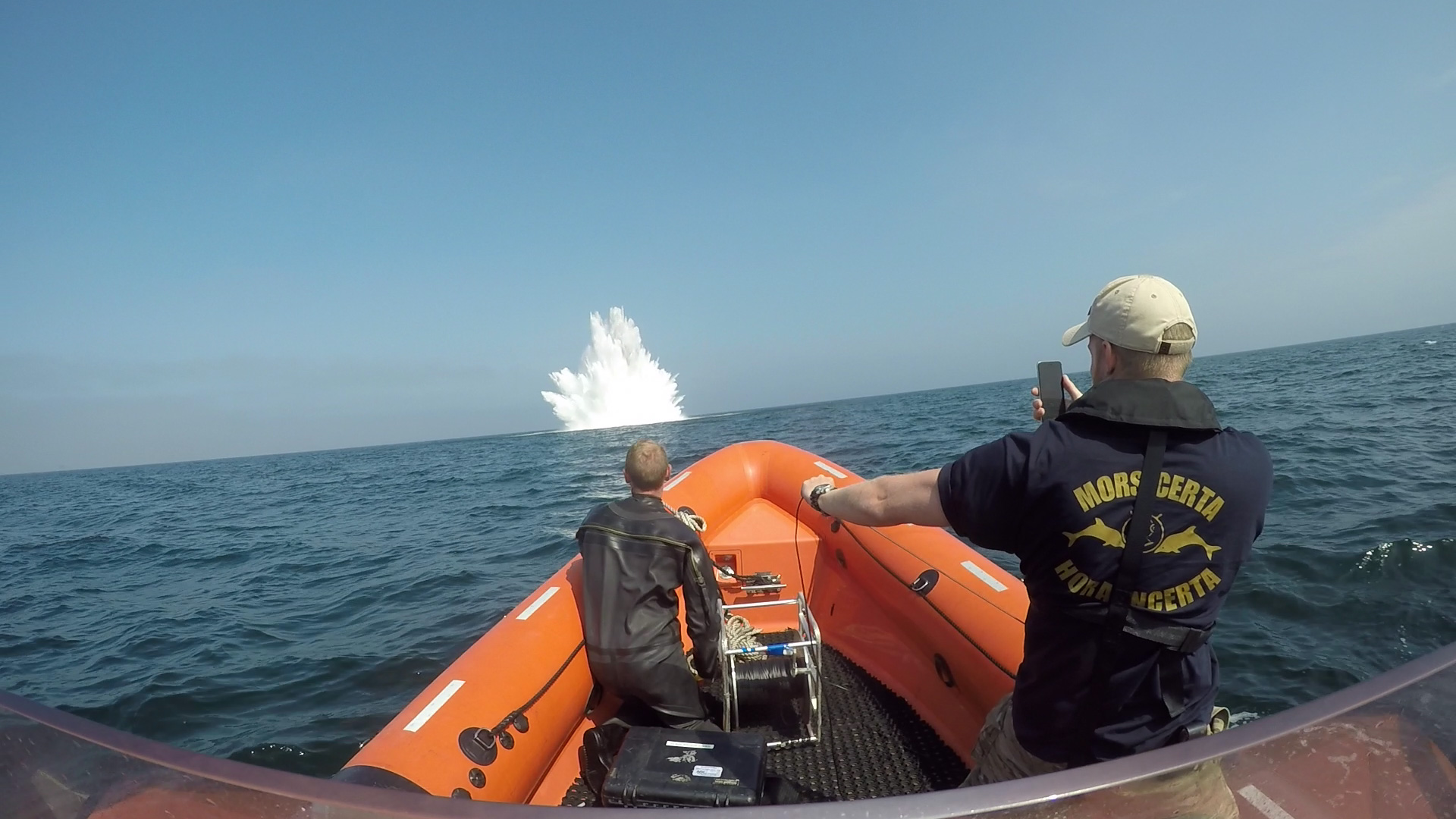 Demolition of German mine at the Horns Rev 3 site in 2016.

It will soon be time for an investigation of the North Sea and Baltic Sea, with the aim of finding old mines or bombs – before Vattenfall employees start building foundations for its wind turbines. Experience shows that there may be unexploded bombs or mines from the First and Second World Wars hidden beneath mud and seaweed at the bottom of the sea in the very area in which Denmark's three next offshore wind farms are planned to help make the country less dependent on fossil fuels.

"The work to find potential mines is currently out to tender, and we're hoping to be in a position to get going in August", explains Vattenfall's senior geophysicist, Dorthe Reng Erbs. She also explains that most of the items likely to come to light will be metal waste such as anchor chains, wires and perhaps the odd radiator or bicycle. At this stage however, one cannot say for sure whether there will be explosive remnants amongst the metal objects”.

Mine blown up at Horns Rev 3

"At Horns Rev 3 offshore wind farm in the North Sea, we found three unexploded mines, one of which had to be blown up. Members of the Royal Danish Navy EOD Services (explosive ordinance disposal) will also this time be on board to determine whether we were dealing with so-called UXO - unexploded ordinance – or simply waste. During a similar investigation at Kriegers Flak, Royal Navy engineers found an old, rusty anti-submarine net from the Cold War". 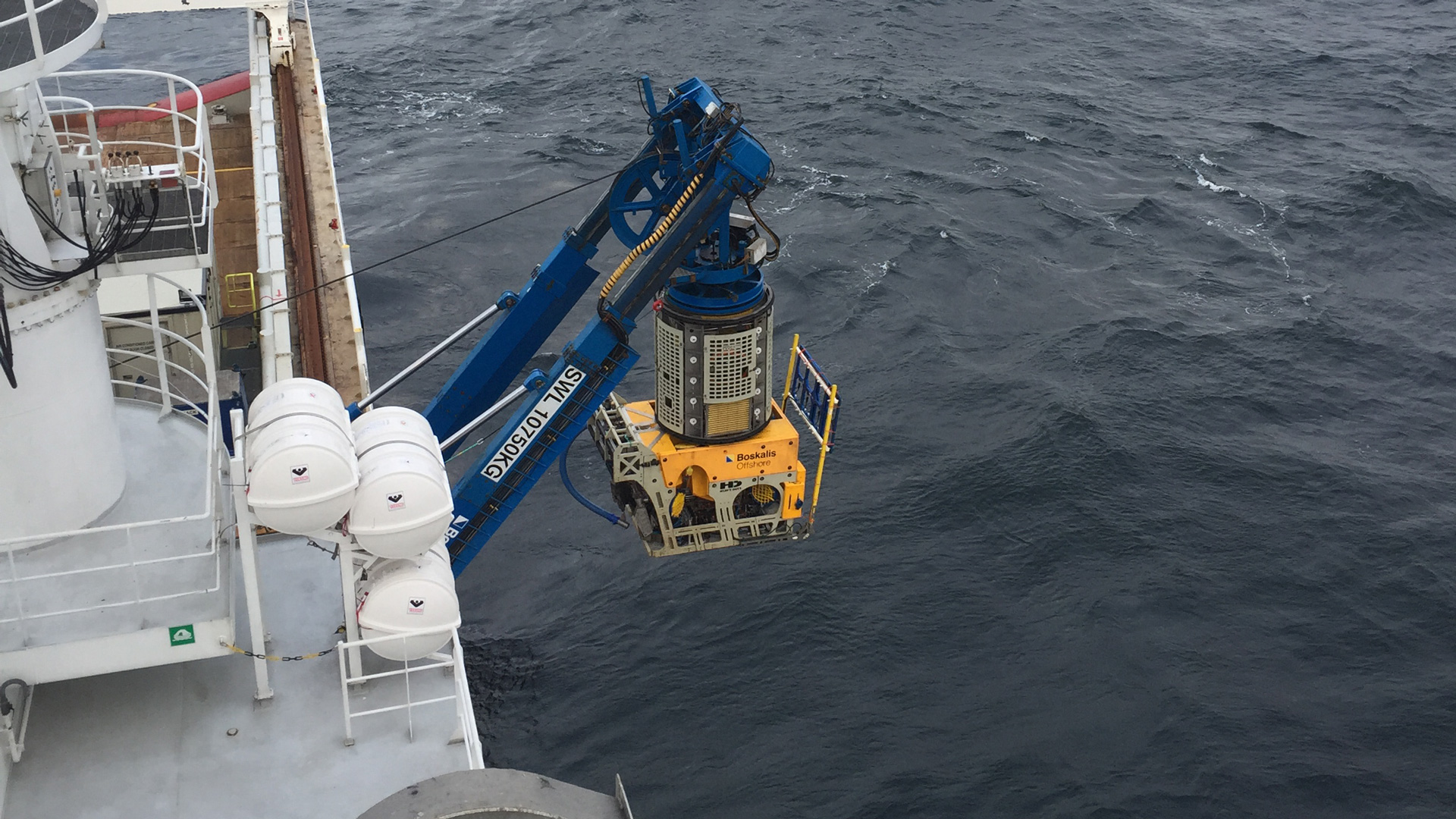 Launching of the remotely operated vehicle at Horns Rev 3.

"We found 22 points at Vesterhav Syd, the same at Vesterhav Nord and 170 points at Kriegers Flak. Additionally there were some large areas where the changes in the magnetic field gave rise to measurements that were unclear. Generally, you can expect one to five per cent of fields which have been highlighted to contain dangerous objects. But we often find other interesting things such as old anchors and perhaps old wrecks", Dorthe explains.

From earlier surveys, Dorthe and her colleagues know that there are three wrecks at Vesterhav Nord. They may be more than 100 years old, which would mean they are protected by the Danish Consolidated Act on Museums due to their potential cultural and historical value. These will be investigated in more detail, but are thought not to be in conflict with the offshore wind farm. 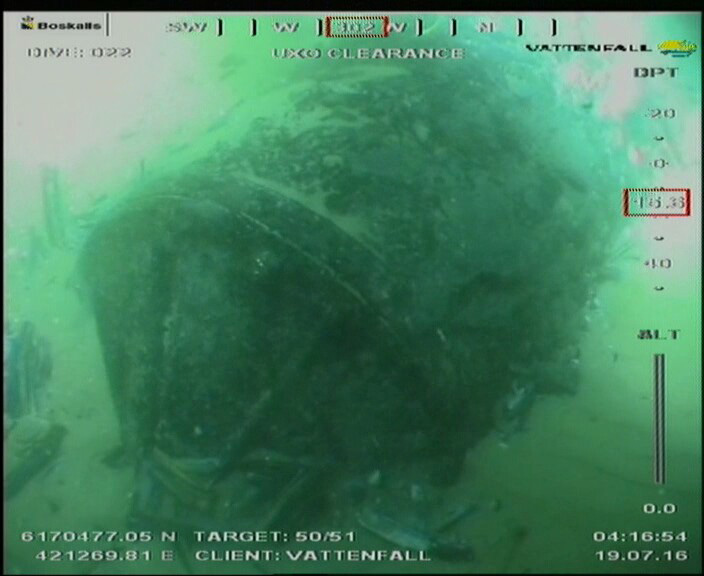 A look at a mine at Horns Rev 3 through the ROV's camera.

The job of the Royal Danish Navy

"The really big equipment comes into action when it comes to determining what exactly is registering on our measuring devices. When the ship leaves her berth in August, she will be carrying a ROV with electromagnetic and acoustic measuring equipment, sonar and a small dredger to clear covered areas. Added to this will be containers of explosives and other equipment belonging to the Royal Danish Navy EOD Services. It is the job of their experts to determine what to do if a mine is found on the ocean floor. Sometimes a device can be hauled away from the area, at other times it is necessary to blow it up and remove the debris", says Dorthe, who expects to be on board for some of the expedition.

Dorthe anticipates that the investigation will begin in the North Sea, which statistically poses more of a challenge in terms of weather than the Baltic, the location of Kriegers Flak. She hopes that the areas in question can be declared free of mines by the end of October.

De-mining in 2016 in preparation for the construction of Horns Rev 3.