At the Dutch Odyssey Blockchain & Artificial Intelligence Hackathon, Vattenfall introduced a special challenge: to find a solution for certification of green electricity from households.

The Odyssey Blockchain & Artificial Intelligence Hackathon is the worlds biggest event of its kind. In April, 1500 people from nearly 30 countries participated in the hackathon in Groningen, the Netherlands.

As one of the partners, Vattenfall contributed with two challenges this year: ‘how can we use various data sources to predict power generation by household customers and convert it into certificates?’ and ‘how can people use their electric cars as backup power sources for their homes or to support the electricity grid?’

Experts from various Vattenfall BAs were on hand to support the teams at the hackathon.

There are more than eight million solar panels on residential buildings in the Netherlands only. Collectively, they are capable of generating 1.6 gigawatts (GW) of green electricity. The unused electricity – around 1.5 terawatt hours (TWh), or 10 per cent of the overall green electricity generated – is fed into the electricity grid as grey electricity instead of green.

Power generated by prosumers is an enormous black hole that goes under the radar of green power, because households with solar panels are currently too small to qualify as certified green energy producers.

The cost of certification is still too high at present. "We hope we can solve that problem with blockchain technology," says Michiel Sintenie, Senior Business Developer and Specialist Lead. "Another aspect at play here is that most people with solar roofs are not yet registered, even though they feed power back into the grid. In this situation, how can we determine how much green electricity is actually generated by private individuals, and thus calculate the total amount of green power generated? This information is very important for gaining insight into what is happening with the households on the grid."

"During the hackathon, various teams did well while working to solve the challenge of how to certify green electricity generated by household customers. The outcome is a model that allows us to use various data sources, such as satellite data, together with machine learning to determine – with an especially high level of accuracy – how much capacity household users generate, even if they are not registered, what their usage profile looks like, and what they feed back into the grid. We then use blockchain technology to label the power fed back into the grid as green by means of a 'smart contract'. If there are enough of these portions of green power to earn a green certificate (1 megawatt hour (MWh)), then the certificate holder CertiQ will issue the certificate automatically. This means that all green power from the households is registered and is in fact labelled as green."

With the aid of blockchain technology, this solutions enables prosumers to claim the green certificates they deserve. 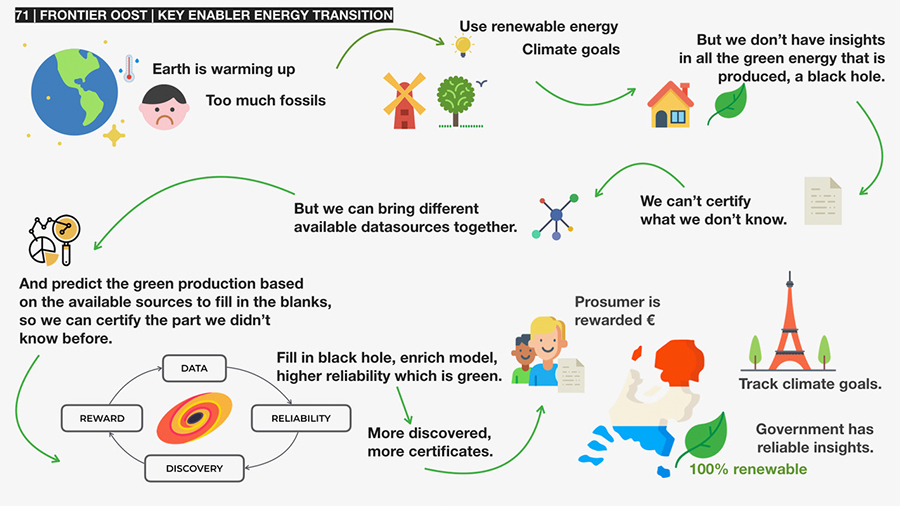 "The model developed at the hackathon ties in with the current energy processes and systems in Europe. As an initiator, Vattenfall will now work with other stakeholders – other energy suppliers, Powerpeers, CertiQ, network managers and the Ministry of Economic Affairs – to launch a pilot project to elaborate on this idea. The ultimate goal is to roll this out in the Netherlands and across the rest of Europe," states Sintenie.

Vattenfall is one of the partners of the Odyssey Blockchain & AI Hackathon. In this third edition of the hackathon, 1500 people in 100 teams from 29 countries tackled 20 different challenges. Vattenfall is one of a number of Dutch and European parties from the public and private sectors that sponsor the hackathon. These are potential customers and – together with the most important blockchain stakeholders and collaboration partners – encourage the teams to create relevant solutions to global challenges.

For more information about the two challenges, visit:

Could an everyday object such as crib be made fossil free for the next generation? Vattenf...