How is Vattenfall Solar Team doing? Report after two stages

On Sunday, October 13, the Bridgestone World Solar Challenge started in Darwin, Australia. For the tenth time in a row, the Vattenfall Solar Team is participating. It has won the title seven times already. During last Saturday's qualifying session, the team claimed the eighth position and yesterday it managed to move up - very cleverly - to the second place. 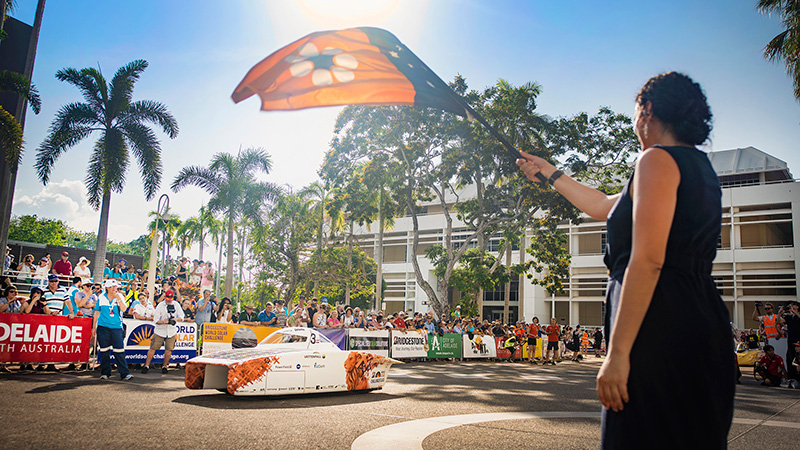 As predicted earlier, the competition is again stronger than in previous editions of the Bridgestone World Solar Challenge. Many of the innovations of 'our Nuna' are now reflected in the technology of our competitors. During today's race, the Vattenfall Solar Team managed to maintain its second position and continues to hunt for the leader, the Twente Univ Solar Team.

Today, the Delft students are camping in a place where they can make use of the last rays of sunshine. The weather is changing today during the race from clear to cloudy. The team's meteorologist, Wietse Bouwmeester, was able to use weather data to find a location where the sun can pass through the clouds. This is important, because the NunaX obviously depends on solar energy to be able to start the race with full batteries every day.

For tomorrow, the wind is expected to pick up. The team is eagerly looking forward to this because in addition to the shark skin, i.e. a foil that makes the NunaX more aerodynamic, the team has a second secret weapon. The solar car has been designed in such a way that it can 'sail on the wind' as it were. It will probably give the car the support it needs to get to the first position.

The team covered 736 kilometres today. In the meantime, 1,369 kilometres have been driven out of a total of more than 3,000 kilometres.

Vattenfall and the Deutsche Telekom subsidiary Power & Air Solutions have signed a supply ...