You need to enable JavaScript to run this app.
Skip to content Go to main navigation
Press release 2017-11-28 10:00
#offshorewind #investments

Vattenfall takes a big step towards more renewable energy production by choosing Siemens Gamesa to supply the turbines for its three new offshore wind farms in Denmark. The order is the world’s largest for turbines to offshore wind power in 2017.

The three wind farms, Kriegers Flak in the Baltic Sea and Vesterhav Syd and Nord in the North Sea, have a total investment value of close to EUR 1.7 billion (SEK 16.5 billion)* .The total installed capacity will be close to 1 GW and this makes it the world´s largest offshore wind turbine order in 2017. The wind farms will have the ability to supply approximately one million Danish households with fossil free energy.

“The deal is a further proof point of Vattenfall’s firm commitment towards a fossil free future and climate smarter living. The investment in this state-of-the-art technology for our modern wind farms, contributes significantly to our goal of building more renewable energy according to our strategy”, says Gunnar Groebler, Head of Vattenfall Wind and member of the Executive Group Management.

The joint deal, which is one of the largest renewable investments in Vattenfall’s history, will cover design, manufacturing, installation, commissioning, testing and service of the turbines. When Vattenfall won the tenders to build the wind farms back in 2016 it was at the lowest prices the world had seen at that time.

To deliver on that promise and to the benefit of Danish consumers Vattenfall has brought the three wind projects under one umbrella and merged the turbine procurement into one deal.

“We are pleased that we successfully have procured ultramodern turbine technology to three of our largest offshore wind power projects. A combined purchase gives us a lower price, which means that construction costs for offshore wind power can be further reduced. Vattenfall will naturally take these cost-levels into other markets”, says Gunnar Groebler.

Towards 2022 Vattenfall will construct all planned new offshore wind capacity in Denmark, investing over EUR 2.7 billion (SEK 25 billion) in Denmark’s green transition, installing 1.4 GW the next five years. This makes Vattenfall the largest developer of offshore wind in Denmark. 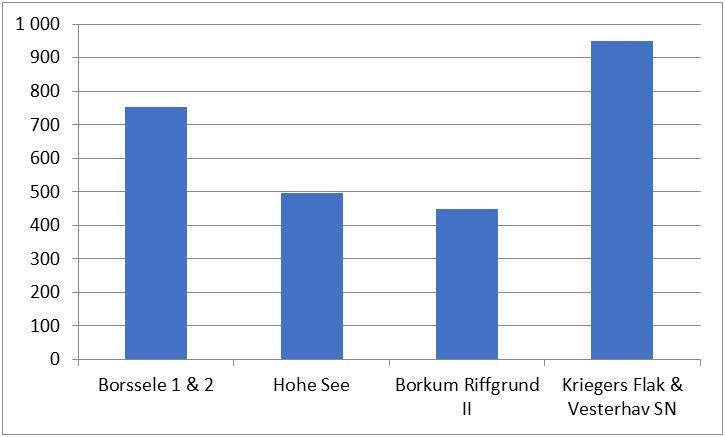