You need to enable JavaScript to get the full functionallity of this site.
Skip to content Go to main navigation
News History 18 June 2019 6 min

During work to prepare the Kriegers Flak area for Vattenfall's new offshore wind farm, several artefacts have been found that are believed to date back from the 17th to the 19th century, and which marine archaeologists have now salvaged for closer investigation.

What exactly happened in the 18th century when a ship lost its rudder at Kriegers Flak in the Baltic will probably never be explained, but after marine archaeologists from the Viking Ship Museum in Roskilde on a dive recovered the rudder, they now have a better idea of what type of ship it came from.

The 8.30-metre-long rudder was discovered at a depth of 28 metres and weighs 1.2 tonnes. At the top, the end of the rudder curves forward characteristically with three round ornaments over the tiller. 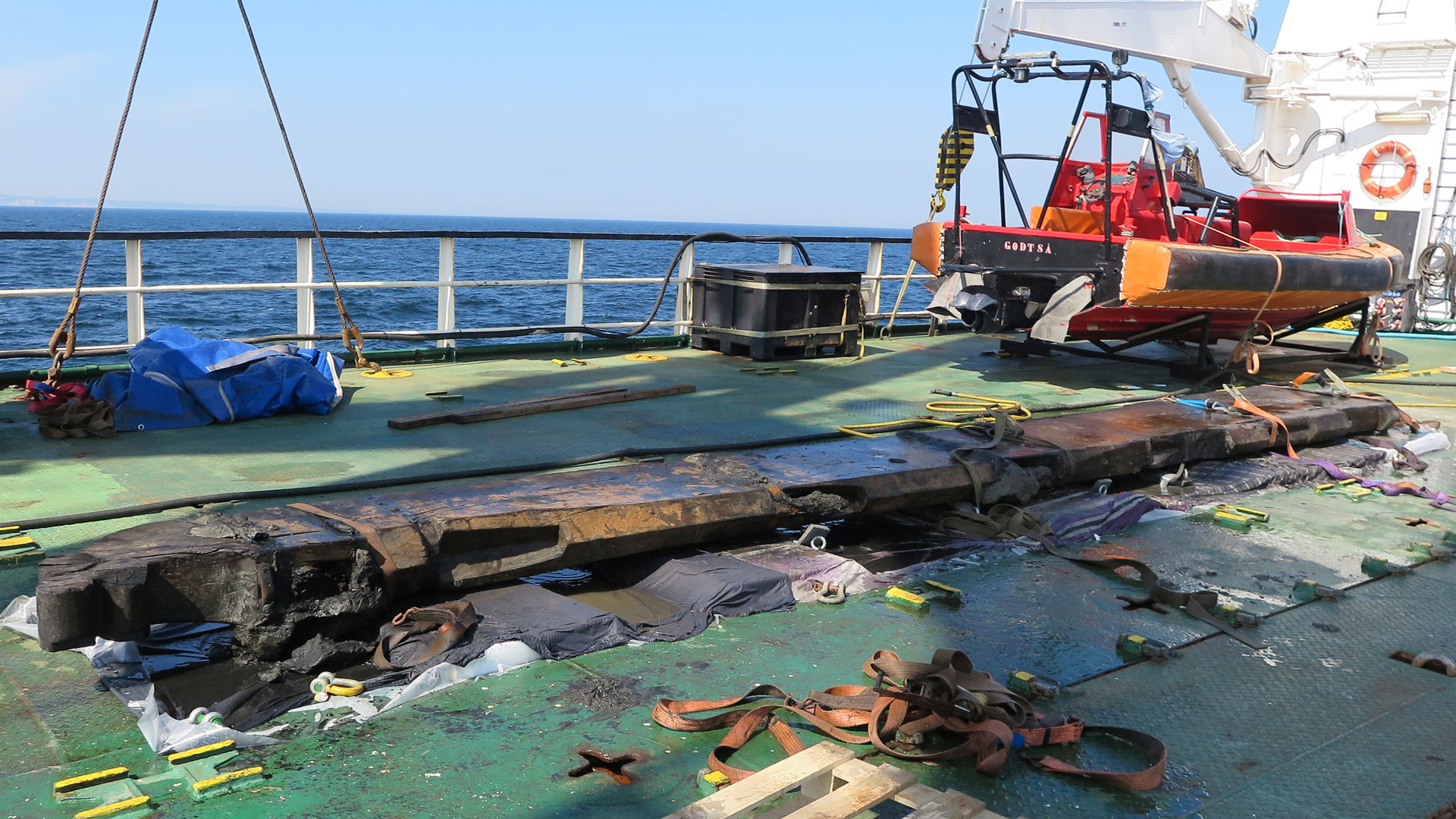 "When we saw the rudder head on Vattenfall's video recordings, we started trying to find a similar rudder in historical books with descriptions and drawings. And as luck would have it, we found a rudder in a Swedish book from 1768 with construction drawings of ships that matches exactly what we had salvaged. The ship in the book is called a Hållensk Hummer Hukare – a "hooker". The rudder head's characteristic ornament, however, is also familiar from finds and depictions dating back to the 1600s; for example, the better known ship type "the flyboat". Both types of ships were extremely common in the 1700s for transport of goods from e.g. Amsterdam to the cities on the Baltic," explains Mikkel Thomsen, museum curator and archaeologist at the Viking Ship Museum that is responsible for discoveries at sea in East Denmark that may be over 100 years old and thus protected under the Danish Museum Act.

"We believe that Kriegers Flak, due to the relatively shallow water depths, could have been used as an anchorage where in poor weather ships could wait before continuing up through the Øresund Strait. The ship may also have been part of the many British convoys in the area around 1800. There are a striking number of anchors lying in this relatively shallow area," says Morten Johansen, another museum curator and archaeologist who was one of the divers on the rudder. 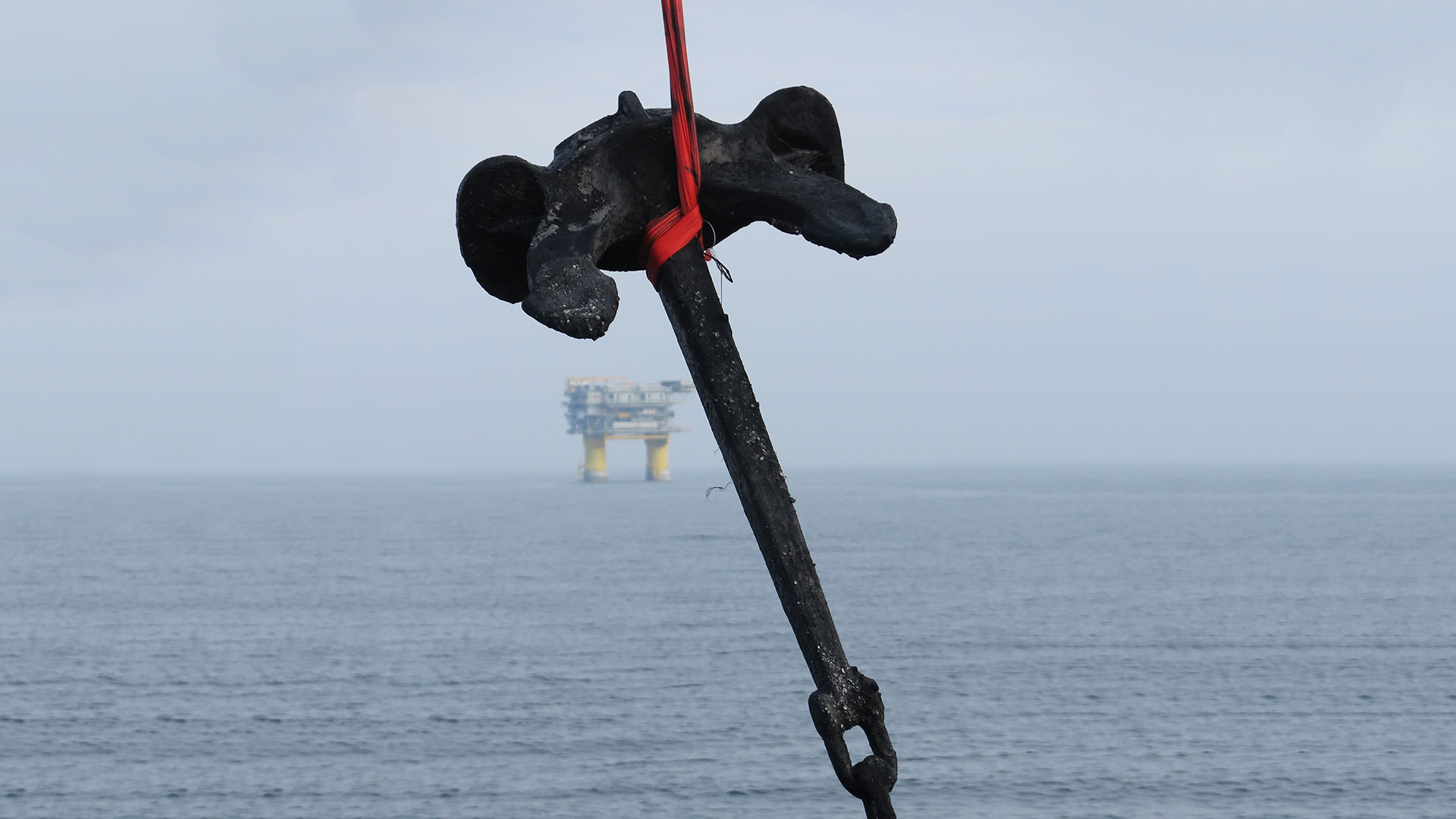 Besides the rudder, Vattenfall's investigation also turned up a so-called leeboard from another ship and five anchors; two of them still bearing a long anchor chain. They were moved on the seabed to make room for Vattenfall's construction work.

Kriegers Flak has been gone over with a fine-toothed comb for historical artefacts solely because Vattenfall has begun construction in the shallows on what, with a production capacity of 600 MW, will be Denmark's largest offshore wind farm once it is at full production before the end of 2021.

"Any offshore wind farm must undergo a preliminary survey of the seabed to clarify, among other things, whether there are any historical artefacts hiding there that date back more than 100 years and are thus protected under the Danish Museum Act. At Kriegers Flak, the Danish system operator, Energinet, has been responsible for the preliminary survey of the entire area, but when we surveyed the seabed in the specific areas where the turbines are to be placed for unexploded mines and bombs, we found a German depth charge and a mortar bomb as well as other markings on metal objects. Because some of them consisted of both wood and metal, they were assessed by the specialists on the ship that carried out the surveys as possible artefacts of cultural heritage, and information about them was forwarded to the Viking Ship Museum."

According to the archaeologists, the area around Kriegers Flak is now one of the best surveyed areas on the Danish seabed. Including those found in the recently completed surveys, a total of 118 possible cultural artefacts have been inspected, of which 22 are considered potential ancient monuments. Three artefacts have been salvaged; the rudder, the leeboard and a mast that was salvaged prior to the erection of one of the farm's substations while two anchors as mentioned have been moved outside the area that will be affected by the construction work.

The archaeological work is now complete, and the Viking Ship Museum has recommended to the Danish Agency for Culture and Palaces that the area be released; excepting however a number of protection zones around the registered, but not yet salvaged, ancient monuments.

"Vattenfall has acted precisely as it should and shown us what they found during the search for explosives. This is a textbook example of great cooperation between the authorities and contractors," emphasises Mikkel Thomsen.

The wood's barcodes help to date the artefacts

The archaeologists' work now moves on to establishing a more exact date for the finds. This is done partly through growth ring dating where a sample taken from each object is compared to something that corresponds to a 'barcode library' of growth rings from e.g. the Nordic region, the Netherlands and the United Kingdom. If you are lucky, you can find a match and can thus establish where and when the timber is from.

Another way of finding out which country the ship comes from is by checking the exact dimensions to see whether they match e.g. British, Dutch or Swedish units of measurement.

What happens to the artefacts?

Those artefacts that are not in the way of the wind farm but that are to remain in the sea will be surrounded by a protection zone, whereas there are three possibilities for those artefacts that have been salvaged if they are deemed to be of conservation interest once the archaeologists from the Viking Ship Museum have collected all the data on them:

Firstly, the artefacts can be conserved and brought into a museum's collection where they will be considered for exhibition; secondly, if a collector is not found, the artefacts can be reburied at sea or in moist deposits on land; finally, the artefacts may end up being discarded. In the latter case especially, it is important that the parts are carefully measured and described so they can be digitally reunited with the rest of the ship if it is found at a later date. The digital 3D measurements can also form the basis of a virtual exhibition or other presentation.

Section of a drawing from the book Architectura Navalis Mercatoria published in 1768 by Fredrik Henrik af Chapman who was an internationally renowned shipbuilder in his day. He was among other things chief shipwright for the Swedish Navy's shipyards in Karlskrona, Sweden.

The County Administrative Board of Skåne grants Vattenfall a Natura 2000 permit to build wind power on the Swedish section of Kriegers Flak. The decision is a step toward achieving Sweden's ...

Vattenfall has chosen Hvide Sande Harbour as its service port for Vesterhav Syd and Nord wind farms. Hvide Sande will to be the service hub for Vattenfall’s Danish offshore wind operations i...