You need to enable JavaScript to get the full functionality of this site.
Skip to content Go to main navigation
News E-transport and charging 2 November 2021 2 min

The Vattenfall Solar Team took third place in the Solar Challenge Morocco. The race took teams through the Sahara Desert with camels and endless sand dunes, and was marked by chaotic traffic, sand storms and stomach flu.

The fifth and final stage got off to a difficult start for most teams. Many participants were suffering from stomach flu, with most of the Vattenfall Solar Team still out of action in the morning. Nine of the seventeen team members were so ill that they were unable to take part in the final stage, and were taken by car directly to the finish in Agadir. Despite the setback, race manager Tibbe Lukassen said that the decimated team would try to finish the race in a manner worthy of the Vattenfall Solar Team. 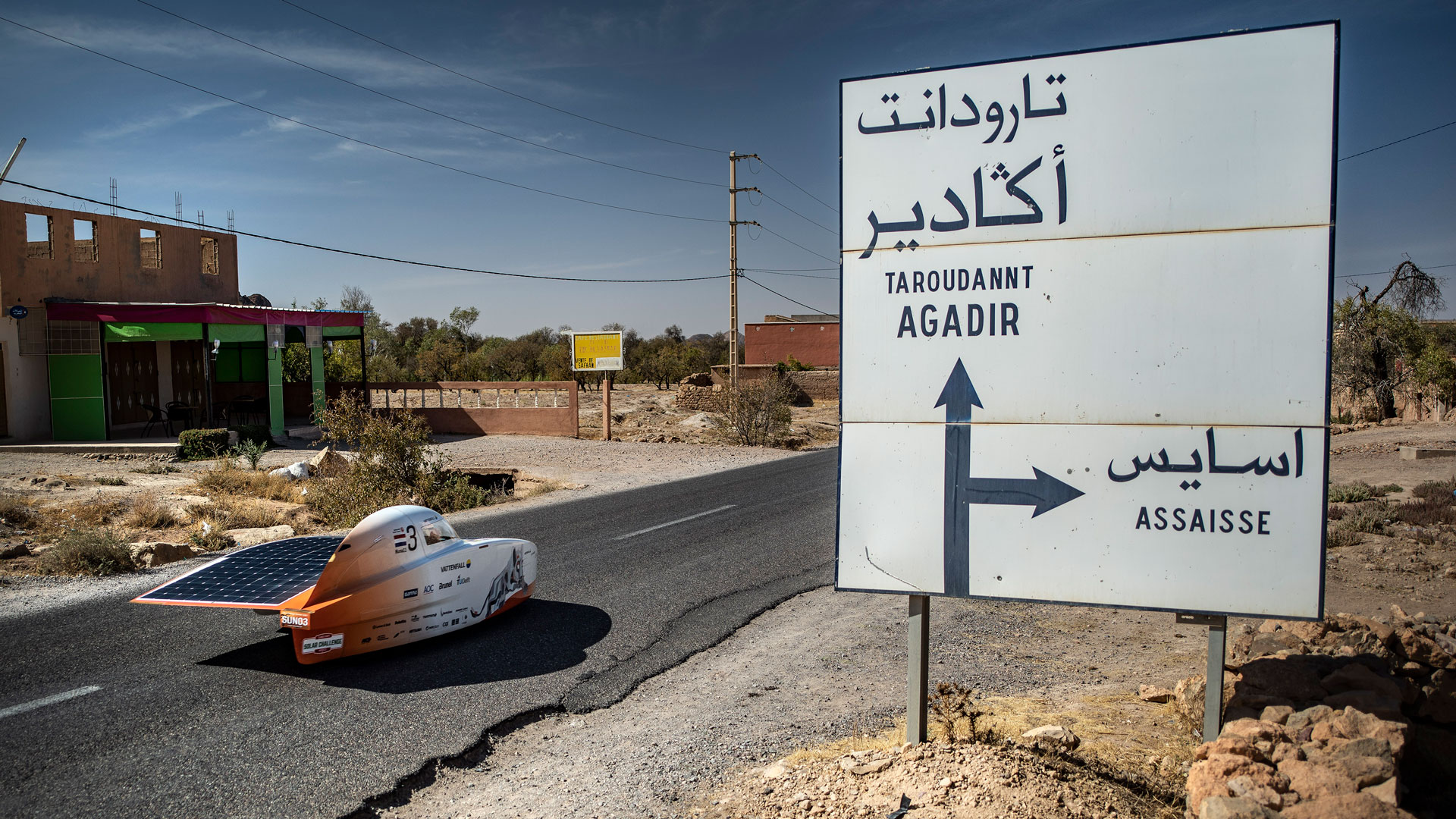 Nuna11 briefly at the front of the stage

Tibbe's words quickly proved to be more than an empty promise. Agoria was overtaken relatively soon and Twente a short while later, and with the team at the head of the race it looked like they were well on their way to making up for the setbacks suffered over the last few days. But things took a turn for the worse for Nuna11 a little later on, as the car had to pull over to have a technical problem fixed. The team watched helplessly as their competitors passed by. Once the issue had been resolved, Nuna11 managed to catch up with the other teams and ended the stage in third place. Driver Dries Borstlap, who took the car over the finishing line, nevertheless looked back with satisfaction: "Today we were in the race for the stage win and were able to hold our own against the other teams. That's a very satisfying feeling."

Camels and goats on the road, sand dunes, whirlwinds and stomach flu

This year, the race was held in Morocco for the first time as an alternative to the World Solar Challenge in Australia, which was cancelled because of Covid-19 restrictions. The race had many exciting moments. Nuna11 drivers frequently had to brake hard to avoid colliding with a camel or goat crossing the road, and they had to dodge wind-blown dunes of Sahara sand on the road. A whirlwind knocked down some of the bivouac tents, forcing the team members to sleep in the support cars, and then stomach flu put a large part of the team out of action for the final part of the race.

The route through Morocco turned out to be a true endurance race for the teams. The cars, many designed for the race through the flat terrain of Australia, were severely challenged by the steep uphill gradients in the Atlas Mountains. Thick clouds on the first day also created difficulties due to the lack of energy input from the solar panels. Half of the participants were unable to complete all the stages within the set time limits. Fortunately, the Vattenfall Solar Team did not suffer this fate. Reflecting on the race after the final stage, Christiaan Wiers said: "Things went very fast in the last few days. It was all over in a flash. We worked very hard for this race in the last eighteen months, setting everything aside for it. It was an incredible experience. Now it's time for a couple of beers!"

After more than 100 years: Electric cars are on the rise again

No fumes, noise or ugly petrol stations, but quiet, clean cars powered by renewable energy instead of fossil fuels. Perhaps this seems like an image from a future to be, but we have already ...