You need to enable JavaScript to get the full functionality of this site.
Skip to content Go to main navigation
News Technology and development 8 July 2021 2 min

The Vattenfall Solar Team unveiled their latest solar car, the Nuna11, on 8 July. The most striking feature is the unique design. The solar car is a three-wheeler with the third wheel in an unusual position and an angled solar panel. With Nuna11, the team hopes to take home the title at the Solar Challenge Morocco in the autumn.

Nuna11 is full of new technical innovations. The special design of the solar car results from the daring choice of two wheels on the right and one on the left. This gives Nuna11 an novel appearance and justifies the name 'Picasso of solar cars'. More importantly, the innovative design optimises the solar car's aerodynamics.

"Traditional three-wheelers have the third wheel in the middle, either at the front or at the rear. The air then has to pass around a wheel in three places. By opting for two wheels on the right, before and after the driver, and one wheel on the left, we have air resistance in only two places. This is the most aerodynamic shape imaginable," explains team leader Christiaan Wiers. 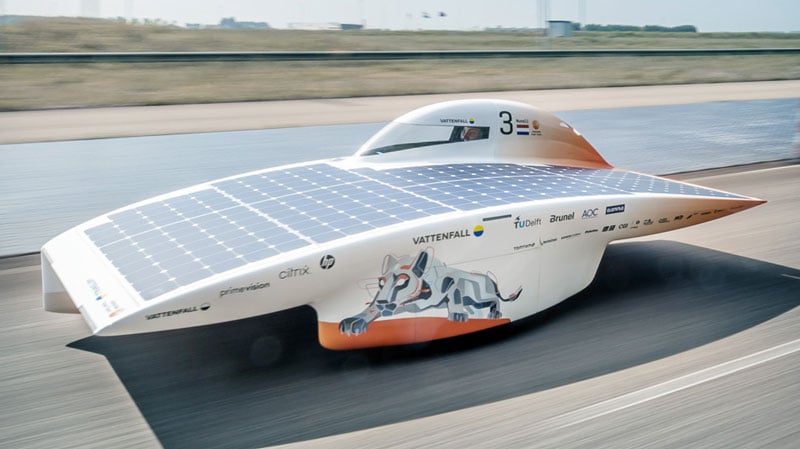 This type of car is called a catamaran in the solar racing world. With the previous Nuna9 and NunaX models, the Vattenfall Solar Team showed how to use this to take advantage of the wind. With the special design of the Nuna11, this advantage can be combined with less rolling resistance from the three wheels. The angled solar panel is also eye-catching.

Wiers says: "This way we create more downforce on the left wheel. That gives the car more stability in windy conditions, and it makes the car faster and safer."

Opting for one wheel on the left and two on the right presented the team with a major challenge in terms of the steering system, explains Thies Postma, one of the drivers: "The wheels are not on the same axis as in normal cars, but they still have to work together to handle corners properly. It took a lot of thought and creativity to turn the vision of optimal aerodynamics into reality."

The new motor controller is a less visible, but equally important, innovation. Previously this was a purchased component, and the team had to choose between power (necessary in hilly terrain) and efficiency. Nuna11 has a controller designed in-house that combines the best of both worlds. Team member Jasper Insinger worked on it for several months, often deep into the night.

"A lot of hours went into testing all sorts of switches and configurations. Getting this to work is a real source of satisfaction for me. With Nuna11, we can now accelerate faster, climb better, and hold our own in city traffic. That's ideal for a race like Morocco", says Insinger.

The Vattenfall Solar Team aims to participate with the Nuna11 in the Solar Challenge Morocco in October and hopes to add a first-place finish to their track record of seven golds in Australia and three golds in South Africa. That's a major challenge with so many top-ranked participants. Whether the race will actually take place depends on the developments and measures regarding the Covid pandemic.

Team leader Wiers: "As a team we're ready for it, so now we have to hope that the race will be possible this autumn despite the Covid situation."

The teams will travel around 2,500 kilometres in five stages spread over the same number of days. The route runs from the south of Morocco, passing along the Atlas Mountains and through part of the Sahara. This means the route has more height differences than in Australia. The teams will start and finish in the port city of Agadir. The team that covers the total distance in the least time wins the race.

Vattenfall and Bünting in new partnership for charging infrastructure

Car parks in connection to the retail chains famila and Combi in Germany, will be equipped with 200 fast-charging stations from Vattenfall InCharge for electric vehicles.