The seminars, with the common theme of 'fossil free within one generation', were well attended right from the start of the week on Monday. A total of 1,100 people visited Energihuset during the three days.

First was a seminar on the subject of how Sweden will be able to achieve its climate goal and become fossil free by 2045. In recent years, Sweden has reduced its emissions by one per cent per year, but now the rate has to speed up fivefold in order for the climate target to be achieved, Vattenfall's Head of Strategy Andreas Regnell noted. As one step along the way, he showed an entirely new 'speedometer' as a visual means of showing where the emissions come from, what solutions there are and what is lacking.

The speedometer, which will be accessible and open to everyone at the beginning of 2019, has been developed by Vattenfall in dialogue with the Swedish Energy Agency, Fossil Free Sweden, the Swedish Climate Policy Council and the Swedish Environmental Protection Agency.

"The difference compared with five years ago is that now it's the business sector that's taking the lead in the development towards fossil free," he said.

Transport in Stockholm and Gothenburg may soon become fossil free

Today, Sweden's carbon dioxide emissions are 52 million tonnes per year. Around a third of these emissions come from the transport sector, which was the subject of Monday's other seminar.

Traffic in both Stockholm and Gothenburg could be completely electrified, according to a study which Vattenfall contributed to. Important questions remain, not least the purchase price for chargeable vehicles and opportunities for charging. But the panel nevertheless agreed that sales of electric cars will really take off within only three or four years, and it is important that the question of charging is resolved by then, especially for residents in blocks of flats who do not have access to their own parking spaces.

Monday's final seminar was about who should take the investment risk for the transition of Swedish industry to fossil free generation, and Minister for Financial Markets Per Bolund was among the participants.

Politicians, financial institutions and the business sector all agreed that there are good political conditions for green investments and plenty of capital, and the risks were considered to be rather small on the whole, provided that there is a demonstrable climate benefit and that the project lives up to requirements for results and income. When Andreas Regnell, Vattenfall's Head of Strategy, summed up the discussion, he was light-heartedly optimistic:

"We've taken a positive view in previous seminars, but this one breaks all our records. The money's available and we can handle the risks. As long as we do certain things first, we'll not only be able to create the world's first climate neutral welfare state, but we'll also be the most competitive. I really believe this," he said.

How to attract power-intensive industry? 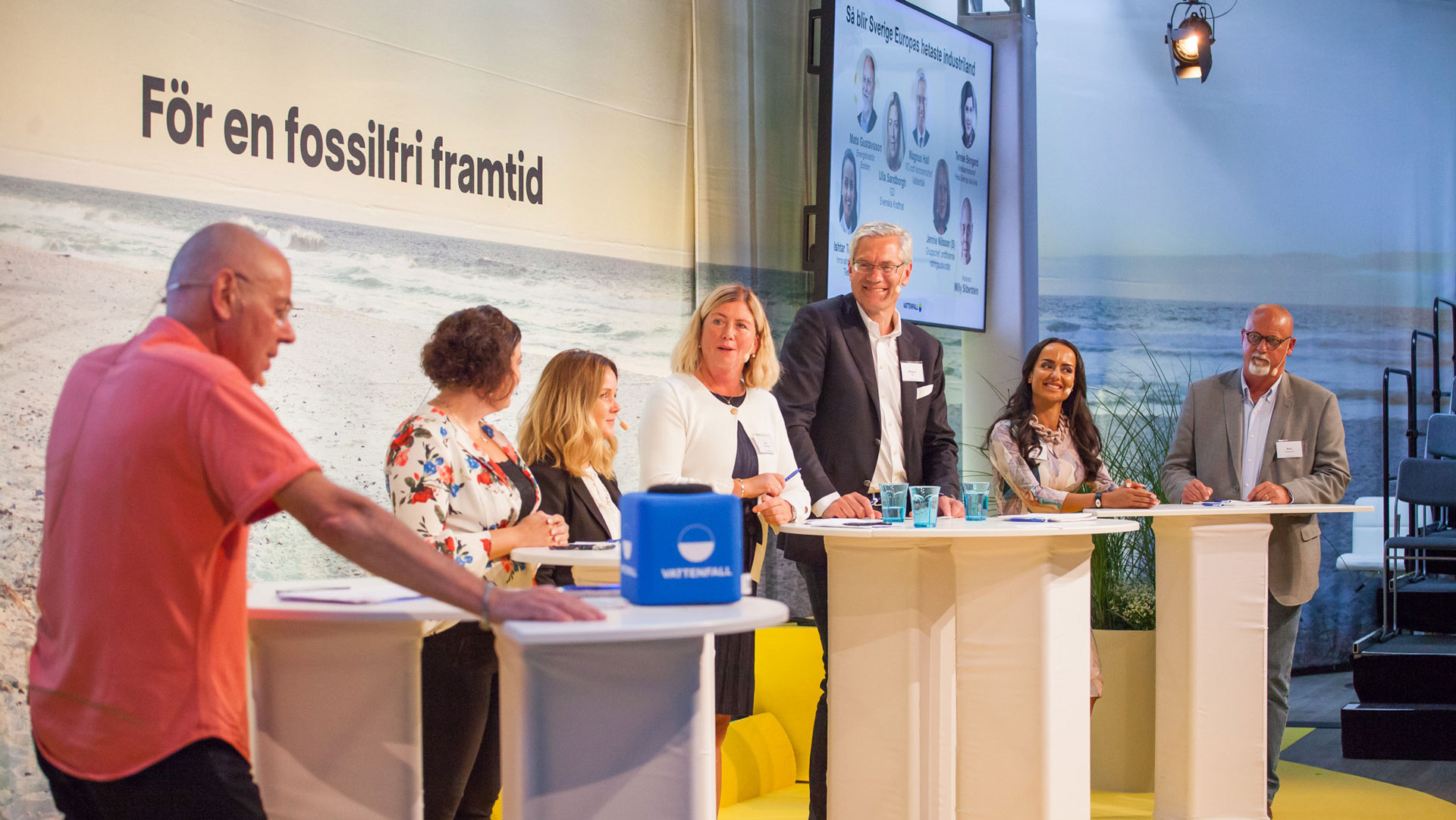 On Tuesday, the main issue under consideration was how Sweden can become Europe's most attractive industrial country by capitalising on the lead it has in fossil free electricity generation, for example, and thus attracting more power-intensive industry to the country. In his summary, Vattenfall's CEO Magnus Hall noted that efforts are needed in the areas of permit processes and grid expansion, and that Sweden also perhaps needs to be a little more pushy, and even better at marketing the advantages of clean energy, a well-educated population, a climate favorable to innovation and a stable political situation. 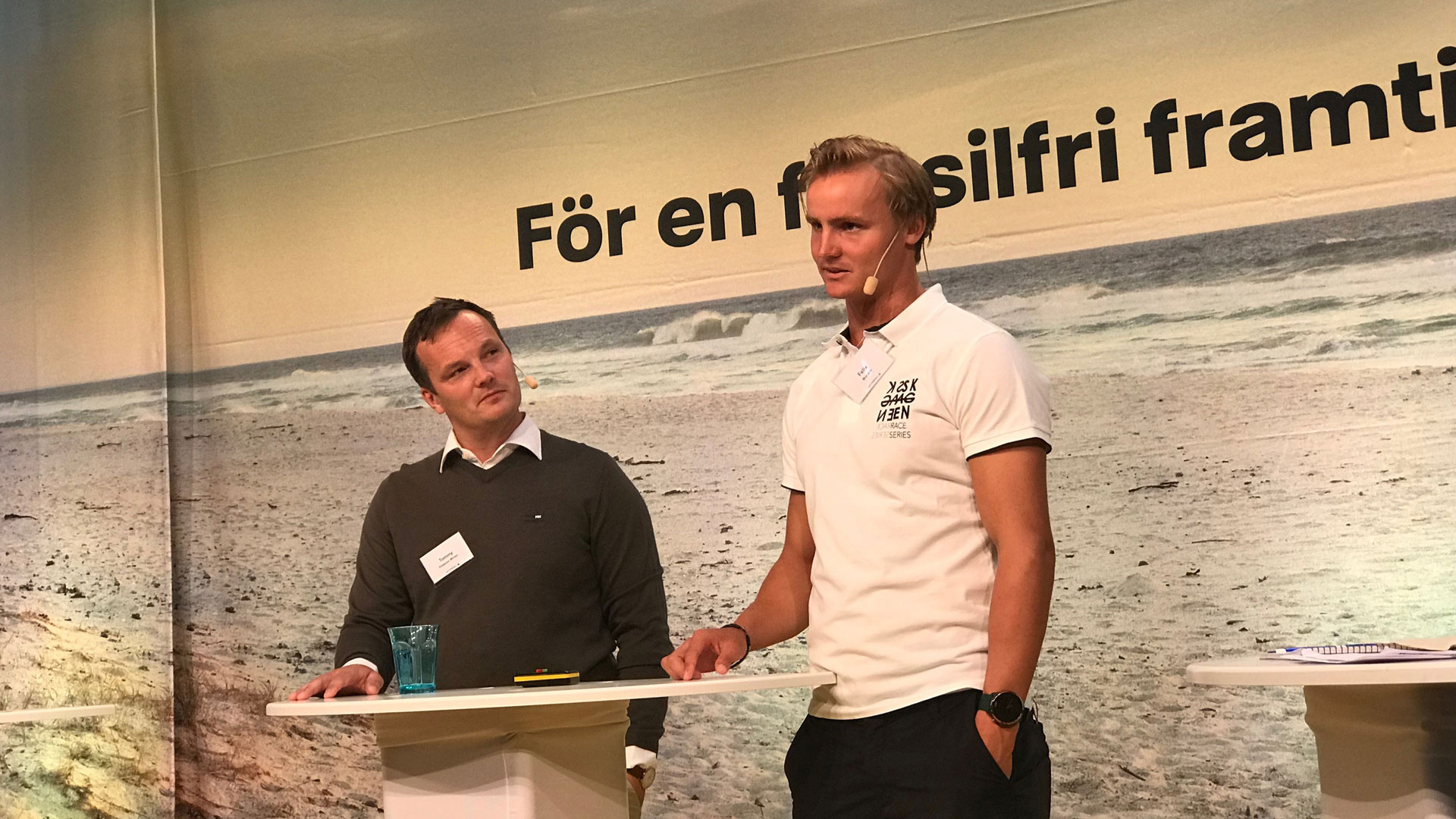 Alpine ski star Felix Monsén talked about how he and the national Alpine ski team will cut their carbon dioxide emissions in half. On the left, Alpine Director Tommy Eliasson Winter.

Before this, there was a discussion of what individuals can do for the climate. Among other contributions, Alpine ski star Felix Monsén talked about his personal motivation, and how he and his team-mates are working to make the national Alpine ski team achieve its own target of cutting its carbon footprint by half between now and 2022.

Too many subsidies for solar electricity

Wednesday began with a rather unusual event for Vattenfall, a conversation between Magnus Hall and Archbishop Antje Jackelén about the connection between spirituality and growth. 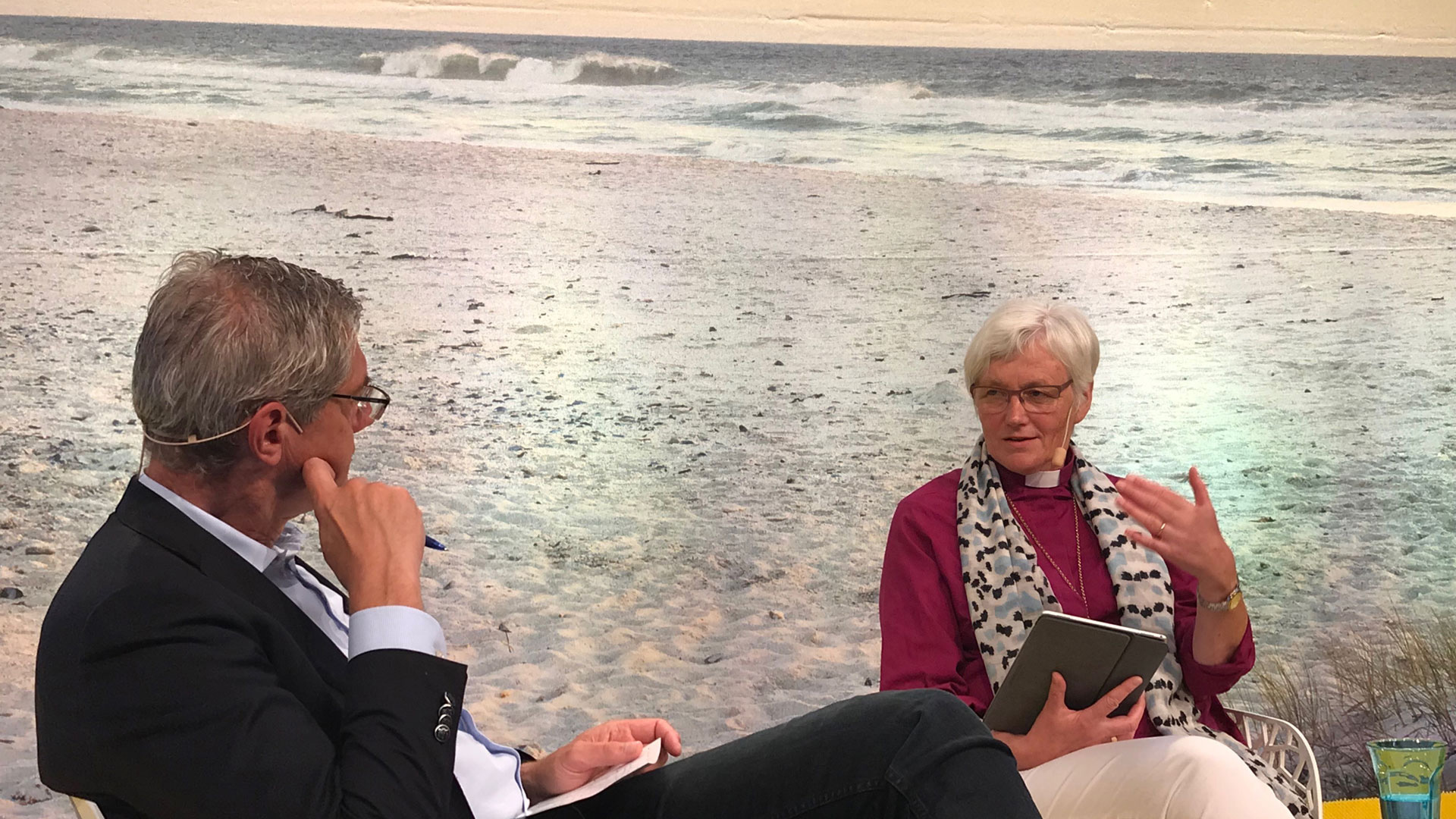 Magnus Hall discussed growth for the soul on Wednesday with Archbishop Antje Jackelén.

A seminar on solar power generation concluded Vattenfall's days in Visby. The panel, consisting of solar cell owners, politicians and experts, were ultimately in agreement that there is a need to reduce the number of different types of available subsidies, grants and allowances, to make it simpler for potential prosumers to make a decision and take the plunge. A number of participants also thought that, along with falling prices for solar panels, it was time to begin phasing out the subsidies and let the solar panel cell market stand on its own feet.

Cecilia Hellner, Head of PRA Nordic, who is responsible for the content of the seminars, was satisfied with the outcome:

"It's been really successful and well-attended. I also have a feeling that we partly attracted a new public we don't usually see at Energihuset. There's also been a really high level of discussion, I think, and we've had good feedback from the participants and the audience. We're all really enthusiastic," she says.

The seminar panels included a total of 80 people - politicians, industry representatives, partners and others. There were also four round table discussions during the week, between Vattenfall and stakeholders from various sectors of society. A number of Vattenfall representatives also took part in seminars in other arenas during Almedalen Week - a total of 14 events.

"Almedalen is a really important arena for raising issues that are important for Vattenfall's operations in Sweden. And Almedalen should not be seen as a one-off event - the issues we raise here, we raise throughout the rest of the year too. But Almedalen is unique, because everyone involved in these issues is here, so you have the opportunity to gather them all in the same room, on the same stage. You don't get that anywhere else," says Karin Lepasoon, Vattenfall's Head of Communications.

All Vattenfall's seminars in Almedalen are broadcast on the internet and can also be viewed later at www.vattenfall.se/almedalen