You need to enable JavaScript to get the full functionality of this site.
Skip to content Go to main navigation
News Wind 8 May 2019 6 min

In the coming years, Vattenfall will build a wind farm, Hollandse Kust Zuid 1 & 2 off the coast of The Hague and Noordwijk that can supply green electricity to 1 to 1.5 million households.

Dozens of researchers at the North Sea will be working day and night through the summer to learn as much as possible about the site where the wind farm will be erected. Using high-tech equipment, they are performing underwater scans to look for bombs and shipwrecks and map the sea floor. 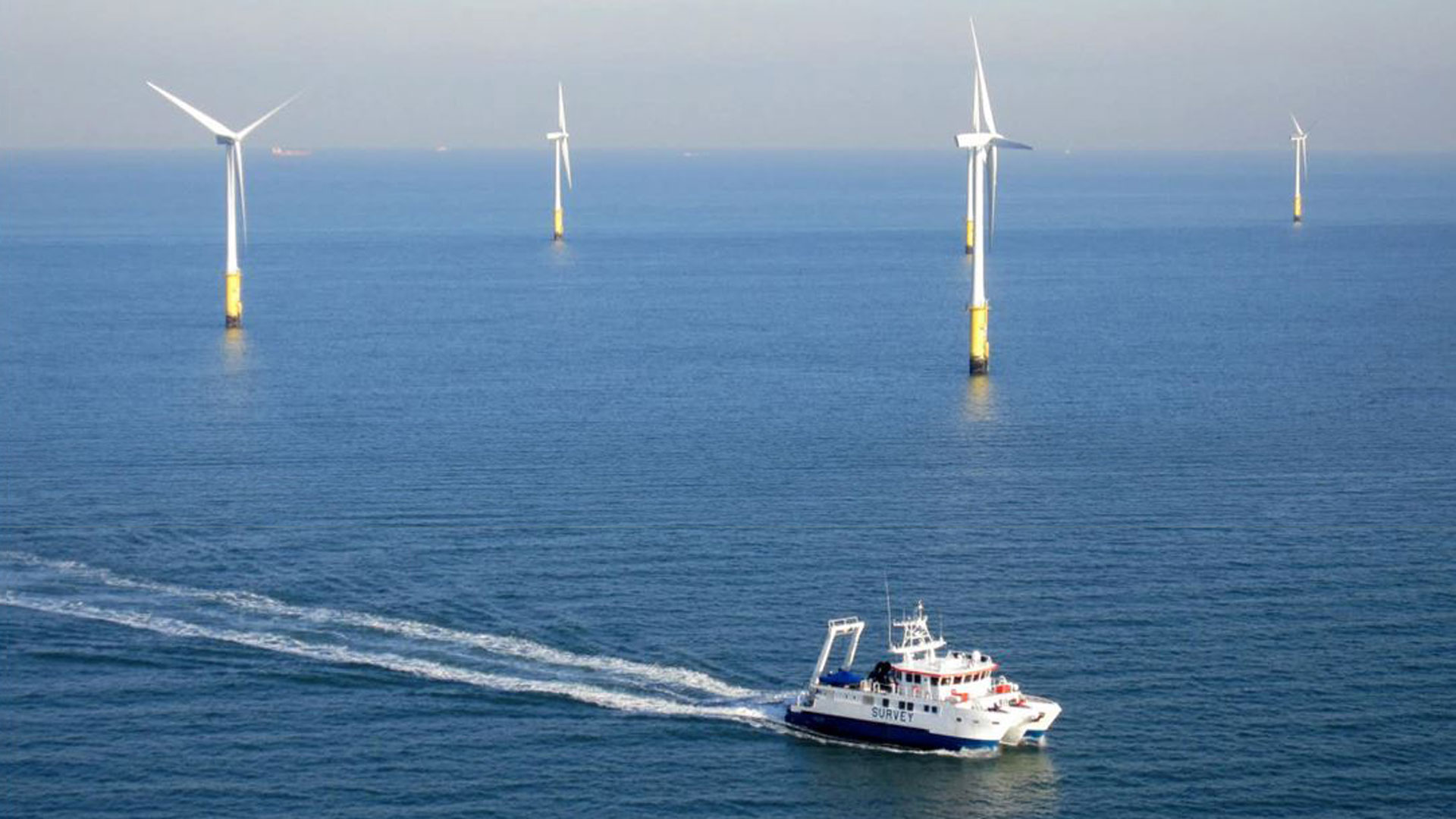 A variety of challenges

While the activities started in February, the storms Freya and Gareth played havoc with the schedule. The two research ships – with a total crew of thirty – were forced to anchor in Scheveningen harbour.

"It was really disappointing to have such bad weather at the start, but there's not much you can do about it," says Daniel Jenkins, Project Manager at Bibby HydroMap, which is performing the geophysical surveys. "The vessels are designed to handle fairly rough weather conditions, but the equipment is very sensitive. We know that if we collect data during bad weather, the quality will be insufficient. That's simply not an option."

According to Aidan Marchand, who oversees the technical execution of the project from the Vattenfall side, the team was already aware that the North Sea does not always offer the best conditions – weather and otherwise – for ground surveys.

"That's why our original plans allowed for several weeks when we would not be able to collect any data."

Due to the turbulent weather, the research ships have to make the most of the calm periods in order to catch up.

"Then the crew collects data around the clock, day and night. This enables us to make optimal use of the times when we have good weather." 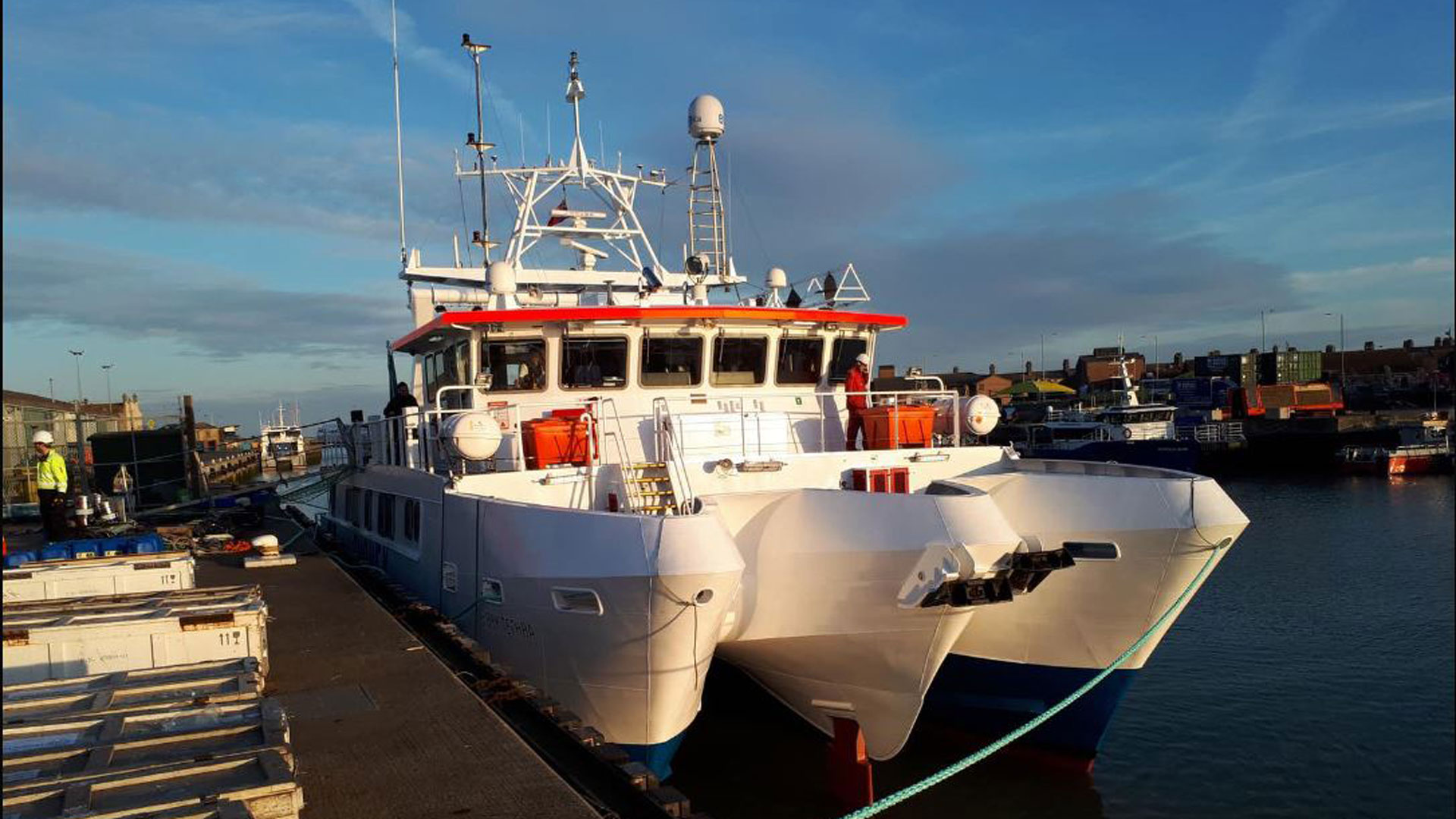 Research boats Bibby Athena and Bibby Tethra moor in the port of Scheveningen every ten days to replenish supplies or change crews.

The sea floor will be surveyed through to August using scanners that are not harmful to the surroundings. This will then be followed by the collection of soil samples. Along with the geophysical surveys by Bibby HydroMap, another company, Fugro, is carrying out geotechnical surveys.

The survey results will be used to design the most effective foundations for the wind turbines, as well as the route of the cables that will be buried in the sand. 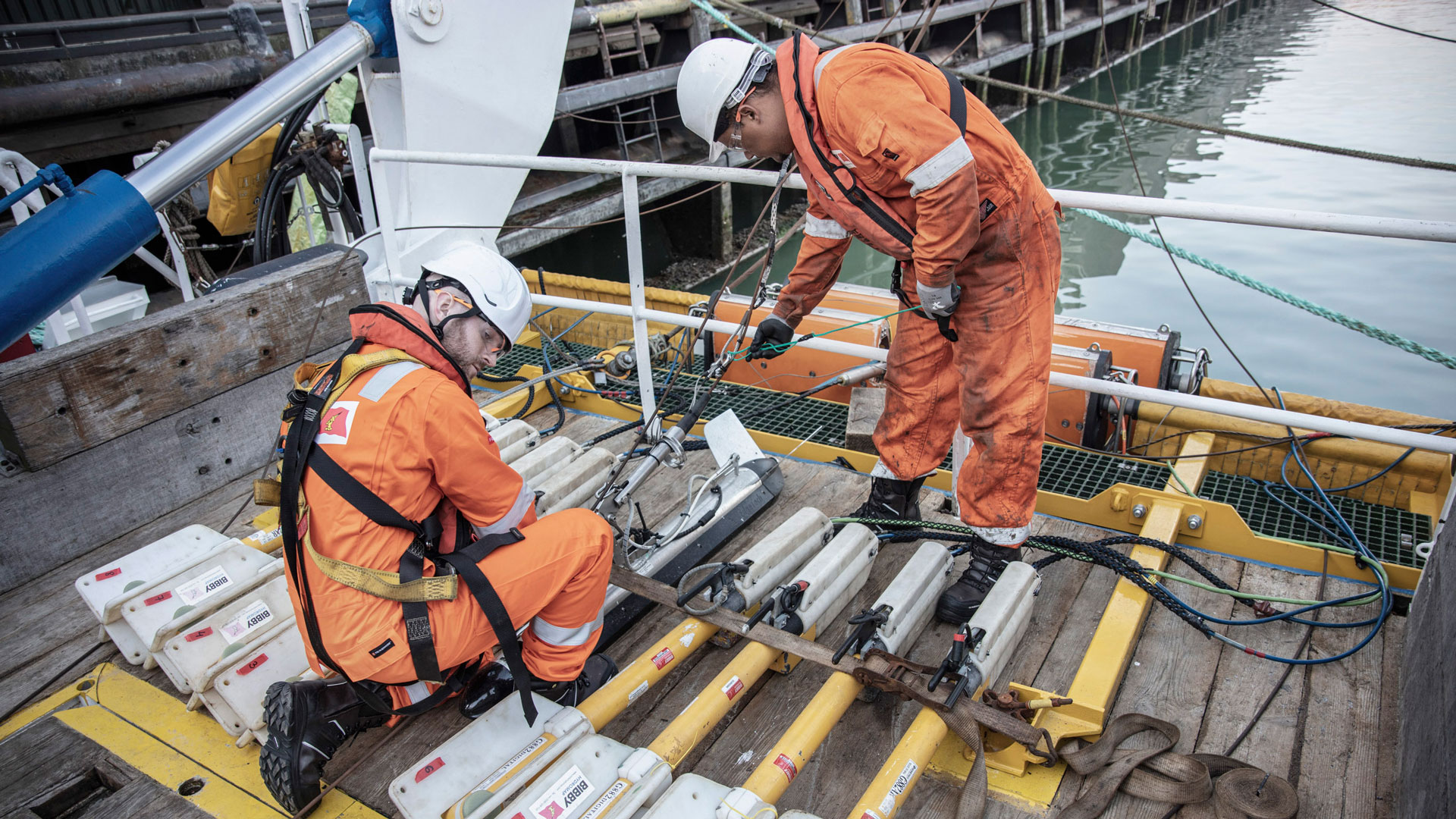 Eight sensors are dragged as close as possible above the seabed to collect the most complete data.

From mines to bombs

The North Sea is home to many historical artefacts, including a wide variety of explosive devices. Countless naval mines were placed during both world wars, and less than a quarter of them were cleaned up after the Second World War. Hollandse Kust Zuid is located just north of the main approach route of the Allied Forces. Aircraft often crashed at sea or released their bombs too early, which meant they ended up on the sea floor. There were also battles on the North Sea, primarily between aircraft of the Allied Forces and German ships. Torpedoes, bombs, rockets and shells often missed their targets and ended up in the sea. Ships that were hit sank to the bottom. In later years, unexploded munitions were frequently caught in fishing nets and then dumped overboard. This often occurred in the vicinity of known shipwrecks, which fishermen avoided due to the risk they presented to their nets.

"It is relatively easy to locate shipwrecks," says Jenkins. "It is more difficult for unexploded munitions. We record a list of objects with their magnetic properties, size, shape and depth. A specialised firm then analyses this data." The next step is to render the explosive devices harmless. Marchand: "We share the data with the coast guard, which in turn draws on the Dutch Royal Navy to clean up the unexploded munitions." Many shipwrecks are already marked on navigation maps, but they may have moved or become buried due to strong currents. Sometimes archaeologists also pitch in. 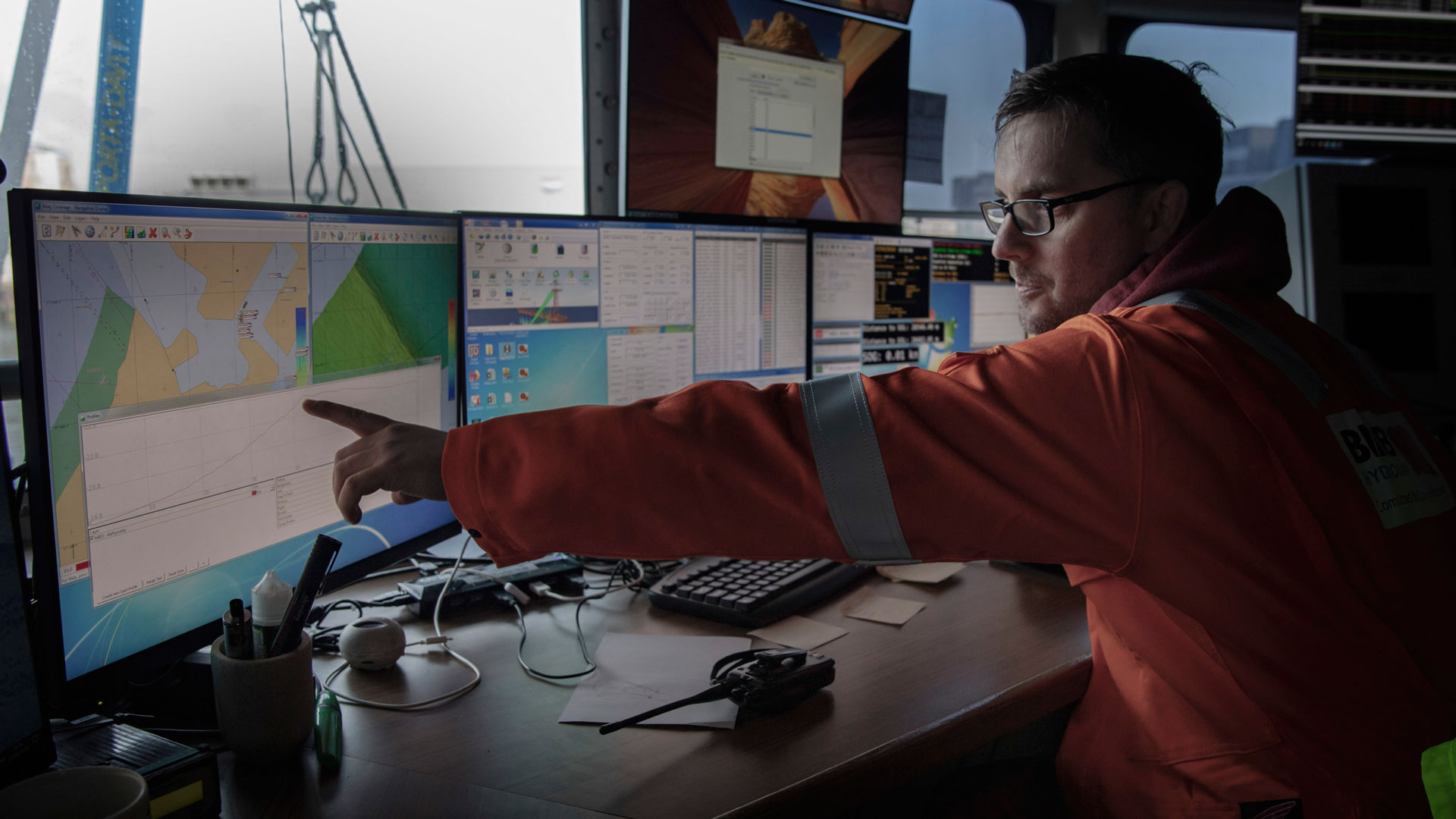 Researchers collect geological data day and night about the seabed where the wind farm will be constructed.

Mapping wrecks and explosive devices only constitutes part of the surveys. To achieve an optimal wind farm design – in particular in terms of the foundations and cabling – it is necessary to have as much data as possible. Thanks to the relatively shallow water and sandy bottom, the North Sea is an excellent location for the wind farm. However, there are a number of things that require attention.

"The moving sand dunes on the seabed make it a challenge to erect the wind farm," says Marchand. "In some places there is a mobile layer of sand up to four metres thick. These sand dunes move, which could lead to problems, particularly in the future. This does not affect the foundations so much, since they can accommodate the changing seabed, but the cables are usually located one to three metres below the surface of the seabed, and we don't want them to become exposed."

The solution lies in the forecasting ability of high-tech models.

"They can predict the behaviour of the sand dunes over a relatively long period of time, and we can take this into account in the routing of the cables."

Bibby HydroMap and Fugro will analyse, test and interpret the collected data through to the end of 2019. This is essential input for the design process of the cabling, foundations and wind power turbines. The engineers have to consider many aspects here.

"The technology for offshore wind is evolving very quickly. The wind turbines installed for Hollandse Kust in 2022 will not be the same as those being made now. With our international experience in wind energy, we can properly estimate these developments and ensure the infrastructure is flexible and suitable for newer technology," says Marchand.

The engineers also take environmental interests into account. For example, they ensure that no permanent damage to the local environment occurs during the construction or operation of the wind turbines.

Hollandse Kust Zuid 1 & 2 will generate green electricity by the end of 2022. For Vattenfall, this is an important step in realising its ambition for the future: to make fossil free living possible within one generation. In addition, the wind farm – with a capacity of about 750 megawatts – will make a significant contribution to the Dutch ambition of having 4500 megawatts of installed capacity offshore by 2023.

Anna Borg in WEF panel on innovations for the climate

The partnership between Fred. Olsen Seawind and Vattenfall was successful as bidder in the Crown Estate Scotland’s ScotWind offshore leasing round.

Vattenfall is to sell part of Prinses Ariane wind farm in the Wieringermeer to a.s.r. As a result, a.s.r. will be the owner of 32 of the 82 turbines on the largest Dutch onshore wind farm. T...