You need to enable JavaScript to get the full functionality of this site.
Skip to content Go to main navigation
News Hydrogen 23 October 2019 5 min

Hydrogen, an important step towards independence from fossil fuels

With hydrogen produced from renewable sources like wind energy, a significant part of today’s carbon emissions from industry, transportation and heating could be avoided. Vattenfall is exploring different options to use hydrogen to decarbonize our society.

Wind and solar energy is expected to provide the largest contribution to the EU renewable energy targets for 2030 and beyond. At least 32 per cent of total energy consumption in the sectors of electricity, heat and transport shall be covered by renewable energy - in ten years’ time.

Since renewable energy faces some challenges such as intermittence, curtailment due to overcapacity or difficulties in long transmission distances, Vattenfall sees in the use of hydrogen great potential to mitigate these challenges.

The surplus of renewable energy from wind and solar can be used to produce hydrogen via electrolysis instead of leaving it unexploited due to limitations in the grid or lower demand. In addition, in order to electrify all sectors and to substitute the phase out of conventional power there will be a great demand of renewable electricity.

Buffer between demand and supply

This so-called green hydrogen, as produced from renewable sources, can act as a buffer between energy demand and supply or as an energy carrier between the electricity sector and the sectors of heat or transport which are otherwise difficult fully to decarbonize through electrification.

“Hydrogen is a key lever for sector coupling between the electricity system and other energy sectors and facilitates the integration of renewable energy into the system. Vattenfall is looking intensively into future business opportunities with Green Hydrogen and, therefore, wants to further develop the technology towards a competitive large-scale deployment”, says Oliver Weinmann, who is Managing Director of Vattenfall Europe Innovation.

Nowadays, hydrogen is used in several industrial processes and it is a fundamental building block for the manufacture of ammonia, which can be used for production of fertilizers. Refineries, where hydrogen is used for the processing of intermediate oil products, are another area of use. Thus, about 55 per cent of the hydrogen produced around the world is used for ammonia synthesis, 25 per cent in refineries and about 10 per cent for methanol production. Vattenfall is involved in a number of strategically important projects in this industries alongside the transport sector and cooperates with strong partners.

“Partnerships with the right industrial players, experiences in existing projects and bundling the full expertise within our utility are a competitive advantage for us,” says Weinmann. 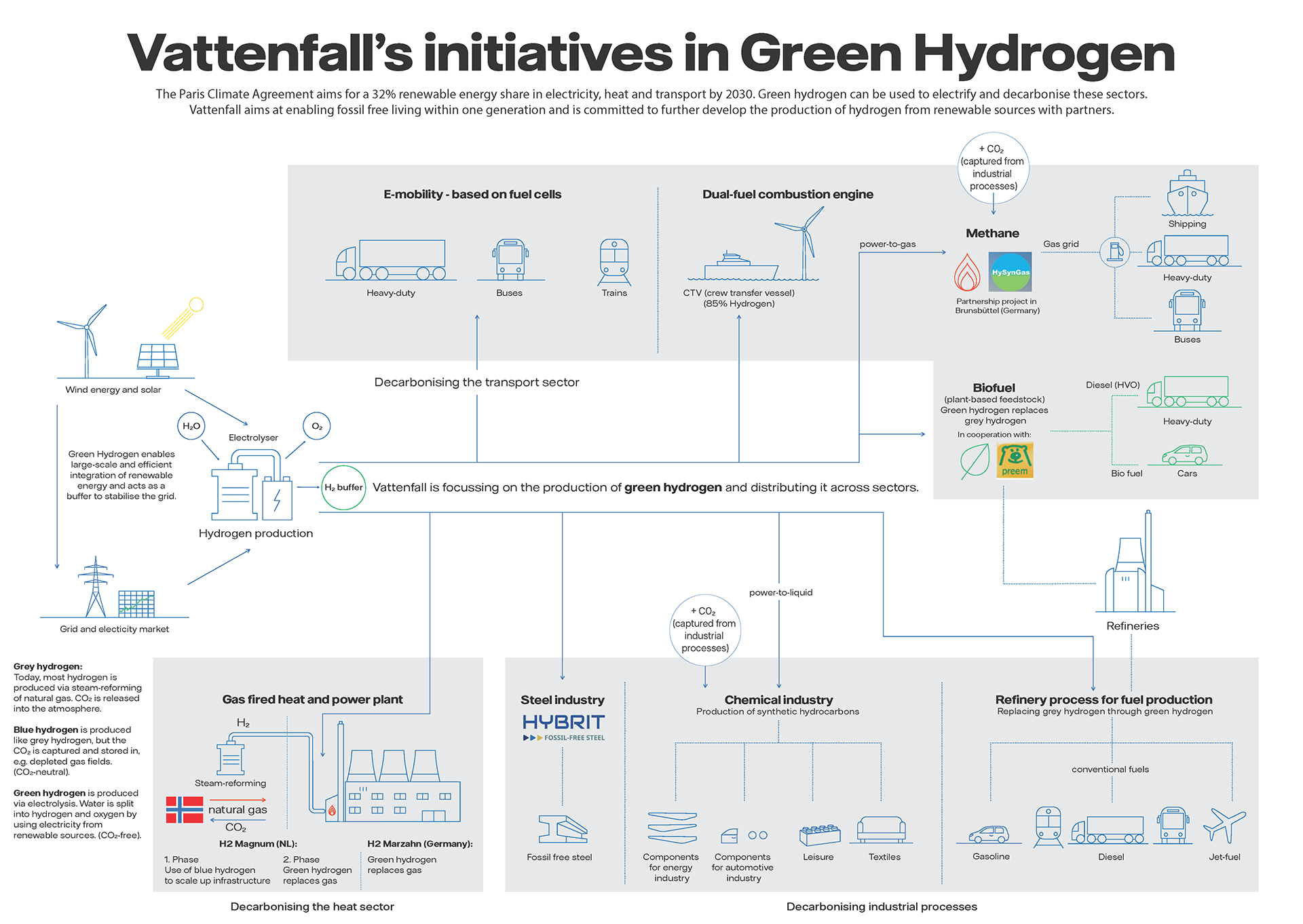 In addition to the examples above, Vattenfall’s Business Area Heat is driving sustainable development of its power and heat plants and develops climate-friendly solutions, which include substituting natural gas for hydrogen. One prominent example is the gas-fired powerplant Magnum in the Netherlands, where Vattenfall has partnered with Equinor and Gasunie to develop this technology.

In a first step, the hydrogen for the Magnum plant is planned to be produced from natural gas, so called blue hydrogen (see infobox). This allows the consortium to build a scalable hydrogen infrastructure already now, whilst in parallel large volumes of renewable electricity for green hydrogen become available as wind and solar power production increases.

The released CO2 from the blue hydrogen production will be stored in offshore aquifers near Norway.

”A stable energy supply will become even more important with the increasing amount of energy provided by weather-dependent wind and solar power. Flexible gas-fired power plants, like Magnum, will be able to provide the necessary grid stability, on the condition that carbon dioxide emissions are being reduced,” says Geert Laagland, Director of Engineering, BA Heat.

The re-use of existing gas pipelines by hydrogen can reduce the costs for the decarbonisation in other sectors significantly, according to Gasunie und Tennet. Some feasible adjustments to the infrastructure are necessary to make it work. Other key industry players, such as the harbour of Rotterdam, have launched ambitious emission reduction programs as well, planning to utilize hydrogen in their operations. A mutual and aligned effort of many industries is currently happening.

In Germany, the initiative HySynGas is planned under the funding scheme of “Reallabore” – by the German Government of economics (BMWi). Vattenfall is teaming up with Arge Netz and MAN Energy Solutions on a first industrial-scale power-to-gas plant in Brunsbüttel  in Northern Germany that will produce hydrogen and synthetic gas made from renewable energy. It can deliver green gas to fuel buses, trucks, ships as well as feedstock for the chemical industry in this area.

However, one important aspect to drive large-scale hydrogen projects is the financial feasibility. Therefore, the EU is pursuing its climate targets with financial support and regulation.

They guide national governments to develop a national binding regulatory regime that encourages the deployment of green hydrogen at scale in order to create economic attractiveness for investors. This includes CO2 pricing as well as exemption from grid fees or funding with investment grants.

The European investment bank (EIB) pushes hydrogen projects which are currently economically not viable without a funding, in particular which are too risky for normal banks to step into.

The funding body for hydrogen of the EU, the Fuel Cell and Hydrogen Joint Undertaking (FCHJU), has a budget of several 100 MEUR to support the development and market introduction of hydrogen technologies.

“Hydrogen is developing as an exciting business for Vattenfall. Based on our market approach we have a pipeline of several commercially viable projects in our core markets which can be realised in the near future”.  concludes Oliver Weinmann.

Why is hydrogen climate smart?

When fossil fuels are combusted the result is carbon dioxide and other emissions. When hydrogen gets converted in fuel cells it forms only H2O, i.e. pure water.

Vattenfall is pursuing the use of Green Hydrogen.

COP15 paving the way for positive developments for nature

COP15, the UN’s high-level meeting in Montreal to promote biodiversity, ended on Monday. The meeting resulted in a new historical agreement with four long-term goals for 2050 and 23 activity...