You need to enable JavaScript to get the full functionality of this site.
Skip to content Go to main navigation
News Wind 29 July 2020 4 min

In the south-west of the Netherlands, Vattenfall is currently constructing its largest hybrid energy park. Once operational this farm will consist of 6 wind turbines, 115,000 solar panels and 12 sea containers with batteries.

The wind turbines have been installed, the construction of the solar panels started in June and the batteries are currently being tested off-site, ready for delivery in August. The amount of green electricity that the energy park will produce corresponds to the annual consumption of 39,000 households.

Watch this video from Dutch hybrid power farm Haringvliet to learn about the many advantages offered by a hybrid park..

“Here at Haringvliet we combine three technologies: wind, solar, and battery storage”, says Ross Williams, Project Manager at Energy Park Haringvliet Zuid. “Wind and solar complement each other very well in terms electricity production. Wind has its higher producing months during the darker, winter months when solar is less productive, and solar has its optimal months when wind is less productive during summer. This means by sharing a single grid connection, we can optimise the use of the full grid connection capacity more often throughout the year, increasing the overall production of the hybrid park for roughly the same investment in the grid connection. The battery facility then provides the additional service of maintaining a balance on the system when it comes to operating frequency and storage of excess electricity”.

The Haringvliet project is special as it is the first of its kind within Vattenfall. It is centred around maximising the use of renewable energy, reducing costs, and having as little impact on the environment as possible by optimising synergies between the technologies. 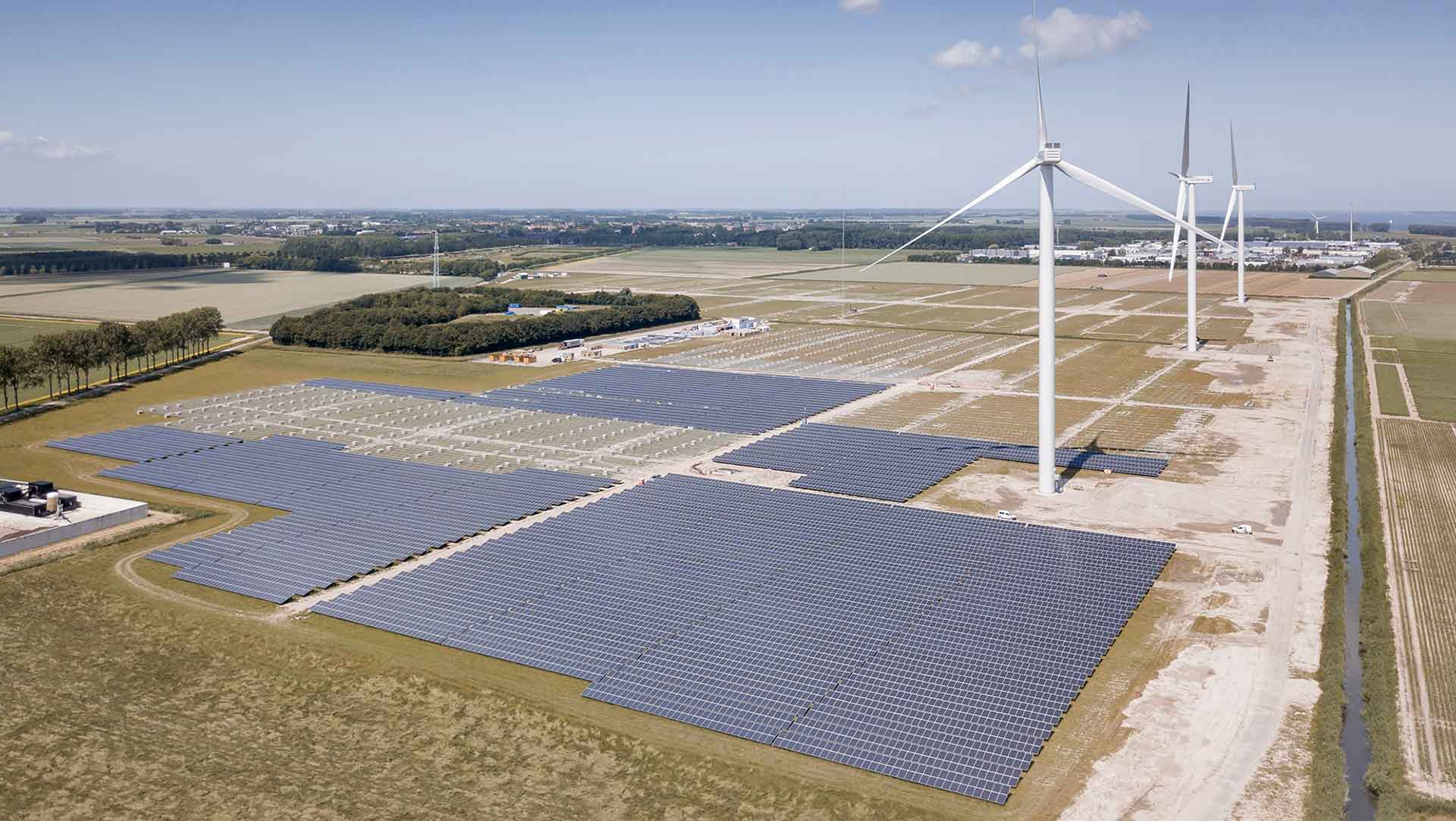 Starting in February 2020, it took two months to complete all six turbines of Energy park Haringvliet Zuid. Leon de Graaf, site manager: “Last winter saw lots of rain and wind. Then the coronavirus outbreak slowed down our work. Normally, we connect cables with teams of three or four colleagues. However, due to distancing restrictions we could only use two people at a time. In April the weather improved, and we were able to pick up the pace and eventually limit our delays”.

At the moment the turbines are being tested and optimised before they will be commissioned. 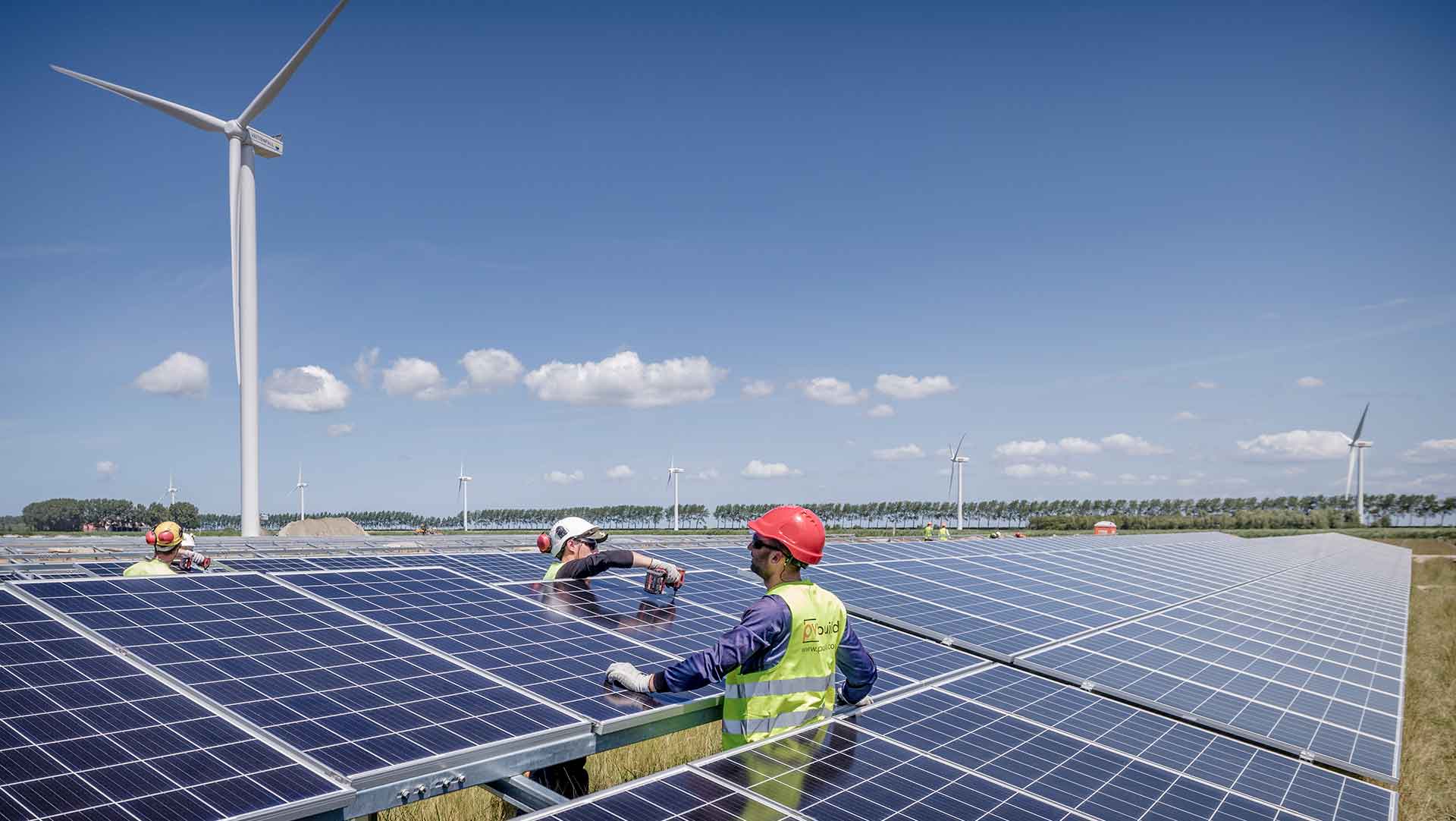 At the beginning of May 2020, the first piles for the solar panels were driven into the ground, followed by the assembly of the first 20 of 115,000 solar panels of Energy park Haringvliet Zuid. Once operational the solar panels alone will produce enough to supply 12,000 households with green electricity.

Hermen Visser, construction manager of the solar park: "We always carry out an extensive quality check on the first set of panels. Does the setup meet our criteria? Are the panels installed correctly? Once we have done these checks, we can continue. We'll be working until October to finish the other 114,980 solar panels".

Energy Park Haringvliet Zuid is one of Vattenfall’s nature-inclusive solar parks. In the design of the park, Vattenfall has considered the experiences of cyclists and walkers in the area: they were allowed to contribute ideas for the construction of a cycle path and a view hill, and the solar panels were no higher than 1,5 metres so that all passers-by can see over them. At the moment Vattenfall is installing beehives.

Batteries for balance and storage

At their factory, supplier Alfen is preparing 12 sea containers containing 288 BMW batteries and the necessary peripherals. These are the same batteries that are used in the BMW i3 electric car. The 12 MW energy storage system is designed to keep the electricity grid in balance and can be used as storage of renewable power in the future.

Daan Terpstra, Team Lead Battery Projects at Vattenfall, explains: “All batteries and other equipment will be installed in the containers at the factory, so that as little work as possible will have to be done on site. At the beginning of June, the batteries were tested, and the transport of the containers is planned for this summer”.

Ross Williams concludes: “With Vattenfall’s ambition to enable fossil-free living within one generation, Energy Park Haringvliet-Zuid will play a huge part in fulfilling that ambition from 2021 onwards when it becomes fully operational. I am convinced we will see many more parks like Haringvliet in all of our markets in the future.

Vattenfall and European Energy have today announced the transaction of eight wind and solar assets, totaling 85.8 MW. The sites are located in Denmark, Germany, the Netherlands and UK.

Vattenfall prequalifies, together with partners wpd and BlueFloat Energy, for the upcoming 250MW floating offshore wind tender off the coast of South Brittany in France.