You need to enable JavaScript to get the full functionality of this site.
Skip to content Go to main navigation
News Technology and development 23 June 2021 2 min

Vattenfall has developed a climate-smart hydropower concrete with less cement content that can reduce carbon dioxide emissions by around a quarter. The first major structures have recently been built on-site at Lilla Edet power station in Göta älv.

Cement production generates large carbon dioxide emissions. So a reduction in the cement content of structural concrete gives a direct reduction in the strain we're putting on the environment. One standard way to reduce cement quantity and heat development internationally is to use by-products that react with cement. This method has been combined with lessons learned from Vattenfall's major periods of expansion in the 1950s and '60s to develop a modern, climate-smart concrete concept.

At Lilla Edet power station in Göta älv near Gothenburg in Sweden, Vattenfall will be replacing parts of the existing dam with a brand new one by 2024. Various methods have been investigated to reduce the amount of cement in structural concrete, thereby reducing both the burden on the climate and the need for cooling that comes with large concrete structures. Extensive tests have been carried out to ensure that the concrete is suitable for construction works and, above all, meets the requirements for dam safety and durability for over 100 years from now.

As a bonus, there is also a positive effect on the working environment for the construction workers as the large amount of cooling pipes inside the formwork otherwise leads to narrow spaces and difficulties in evacuating people in the event of an accident.

'The objective was to define a climate-smart concrete concept that is ready to be implemented at the start of the construction works. This is as long as a maintained or extended service life can be assured for the structures and that it´s a robust concrete concept from a production point of view  without any disruption or cost increases in the construction phase', says Erik Nordström, Development Engineer at Vattenfall R&D. 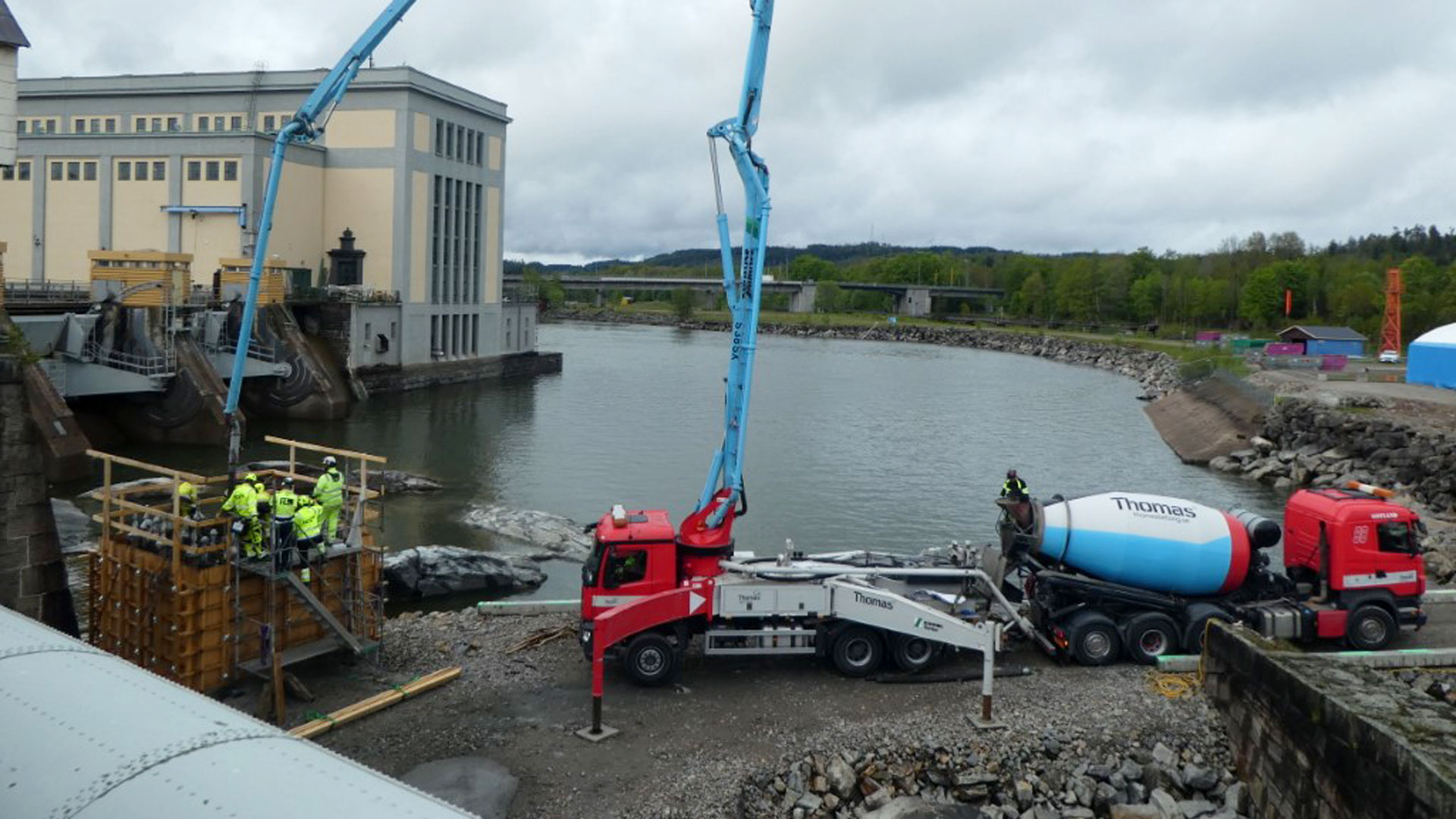 To ensure that the developed concrete concept works in practice, a full-scale demonstration casting was carried out together with the contractor, NCC, and the concrete supplier, Thomas Concrete Group. This gave the opportunity to do a pump test of the concrete over a longer distance and concrete workers were given the opportunity to try working with the concrete to evaluate whether the properties worked from a practical point of view. The demonstration casting went excellently without pump stops and the concrete workers were very pleased. Monitoring of temperature increase and strain during hardening of the concrete was done using fibre optic measurements in collaboration with Chalmers University of Technology.

There are also future plans to use this concrete concept, for example, with wind power, although some adjustments would then be required for the composition of the concrete.

'You could use this concept when, for example, casting wind power foundations, although the actual composition of the concrete would then probably need to be slightly adjusted to suit the specific exposure environment', says Nordström.

Read more about how Vattenfall is working to reduce climate impact

Vattenfall once again number one in biodiversity ranking

Vattenfall has once again taken first place in Ecogain’s biodiversity index.  Some of the largest companies across Europe have been assessed, with  Ecogain evaluating biodiversity ...

Ulrika Jardfelt, Senior Vice President Business Area Heat at Vattenfall comments on an open letter from a number of environmental organizations on Vattenfall’s use of biomass.