Cold and moist air forms ice on the blades, which leads to poor efficiency and requires wind farms to be shut down with loss of renewable electricity generation.

"A new way of removing snow and ice is infrared lamps which are mounted on the tower. In the event of snow or ice, the rotor blade is stopped in front of the tower, the lamps are turned on and the ice is melted one blade at a time," says Pär Attermo, winner of Vattenfall Innovation 2018 and ordinarily a Controller at Vattenfall Wind Power.

The winner estimates that generation losses in northern Sweden can be reduced by up to ten per cent. The new technology for de-icing is not faster than the current system of having heated blades, but the cost is estimated to be just a quarter, which makes it very interesting. The saving will be about 1 million kronor per turbine with enhanced safety as it will eliminate ice being thrown from the turbines.

Infrared lamps on the tower do not require any complicated electricity supply and can therefore be made more powerful. The entire blade can be de-iced. They can also be retrofitted on turbines that do not have de-icing. With the infrared lamps it would only be necessary to stop the turbines for one hour every day, even in the worst case scenario.

"The members of the jury saw many excellent proposals, all feasible in a reasonably near future provided that the ideas are further developed…we have a proposal with a high level of innovation, it was well worked-out, had a good story, and as the icing on the cake had a very good business case," says Jonas Stenbeck, Head of Vattenfall Sales for the Nordic Region and the jury's chair.

The Swedish Patent and Registration Office has been engaged to check whether the idea is protected by patent. There is a major potential economic value, both internally and externally. 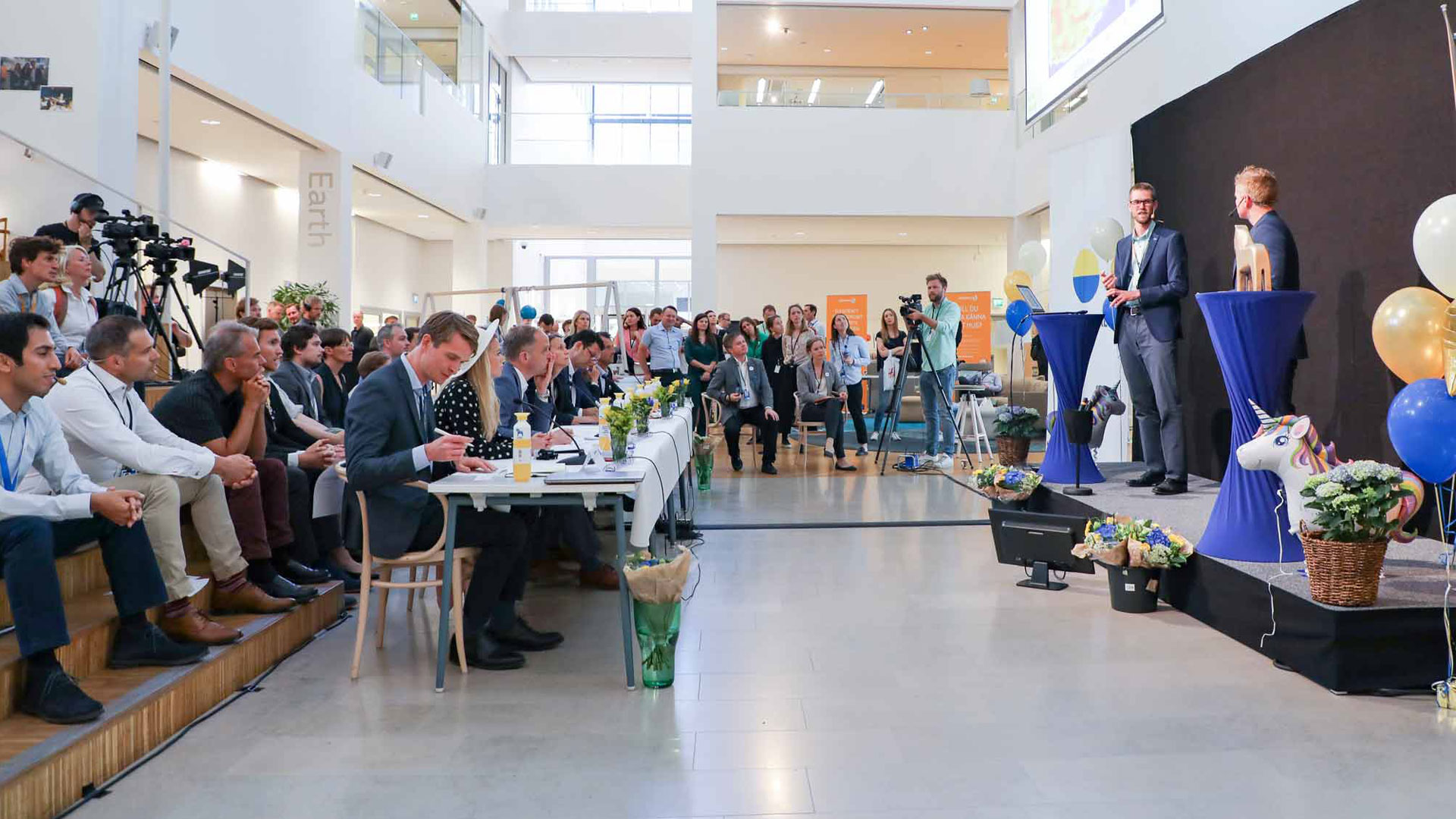 An atmospheric final with audience, finalists and jury.

About this year's competition and final

The Swedish innovation competition for 2018 has focused on sustainability with topical themes such as digitalisation, democratisation, decarbonisation and decentralisation. The task was to resolve tomorrow's problems. Ninety one ideas were submitted in the new digital portal, with the employees able to visit the site, read about the ideas and leave comments. Experts in the organisation have been involved throughout. Nineteen ideas qualified for the semifinal, ten ideas proceeded to the final plus one idea as a wildcard which was voted for internally, and on 31 May the grand final was held in the atrium at Vattenfall's headquarters in Arenastaden in Solna. The jury consisted of eight people, one of which was from outside the company. The TV personality Rickard Olsson was master of ceremonies for the day and he couldn't stop himself from making the odd joke during the proceedings.

"We need everybody to get involved if we are to come up with the best ideas. We need to be proactive in our industry," says Amira El-Bidawi, project manager for Vattenfall Innovation.

A major improvement over last year is that all the finalists will engage in further dialogue with a business development manager, and then be directed to those most suitable to support them to continue developing the product.

"We have an outlet for our creativity, it is good for our customers and it is good for Vattenfall, which gains more motivated employees and perhaps ultimately makes some money," says Stenbeck.

The final of Vattenfall Vision in Germany was finalized on March 20, and the final of Nuon Next in the Netherlands takes place on October 11th.

This is Vattenfall Innovation

Vattenfall Innovation is an innovation network for employees within Vattenfall. An innovation competition is also held every year with the aim of finding new, climate-smart ideas and solutions to help our customers make their lives even more climate-smart and free of fossil fuels within one generation.