You need to enable JavaScript to get the full functionality of this site.
Skip to content Go to main navigation
News CSR 8 July 2019 3 min

25 years in support of the environment with Vattenfall Umweltstiftung

25 years ago, HEW (Hamburgische Electricitäts-Werke) founded the Vattenfall Umweltstiftung (environmental foundation), which is today managed by Vattenfall. The foundation’s purpose is to financially support small and medium-sized projects and in that way help to protect the environment.

“We incite something good” – that has been the motto since 1994. More than 4.6 million EUR have been spent since then on 187 projects around plants, water bodies and animals. Project partners are schools, associations, non-profit and environmental organisations or parents’ associations.

On 13th June the foundation celebrated its 25th anniversary in Hamburg, City Nord, together with some of the people who have previously been responsible for the foundation and came together to cast a glance into the past and the future.

Olaf Litwiakow, working for Staff Function Public and Regulatory Affairs EU and located Berlin, is the chairman of the management board of the foundation:

“I am so happy that after 25 years, we can look back on a big variety of projects. What is always impressing is the personal commitment of the people involved – mostly volunteers, the joy and devotedness, but also the proudness of the people for their project. There is no question about it: also in future, we want to incite many good things.”

The projects cover not only the protection of nature and biodiversity, but also focus on knowledge transfer and the promotion of creativity among children and young people in order to enable them to develop sustainable solutions and to raise their environmental know-how. The foundation also believes that it is important to create contacts and networks among organisations, supporters, authorities and private people.

“Tailwind” - Rückenwind in Hamburg, fish ladders and crayfishes in the Harz mountains

One of the foundation’s project hotspots is Wernigerode where several fish ladders were supported in order to make spawning waters up in the Harz mountains accessible again for the endemic brook trout.

The Vattenfall Umweltstiftung supported the construction of several fish ladders in Wernigerode. Beate Märtin is in front of a small group of volunteers of the environmental foundation visiting the fish ladder.

In 2018, foundation funding allowed the preparation of a small pond for re-settlement of the European crayfish which is threatened with extinction.

Beate Märtin who works for Staff Function Environment in Berlin is the administrator of the foundation and contact person.

“I was deeply impressed by a project of the Hamburg association “Rückenwind” (tailwind) that works with criminal young people who revitalised some of the urban creeks in Hamburg. During their working hours, ordered by a judge, they removed waste from the creeks and re-naturalised the shorelines. It was not only the objective to tick off the working hours. The young people could create something to be proud of, something that shows them new perspectives. And this really worked,” she says.

The project „Germany’s wild bees”, supported by the Vattenfall Umweltstiftung in a kindergarten in Markersbach in Saxony and in an environmental centre in Goldisthal in Thuringia, last year received the award as “Official project of the UN decade on biodiversity”. 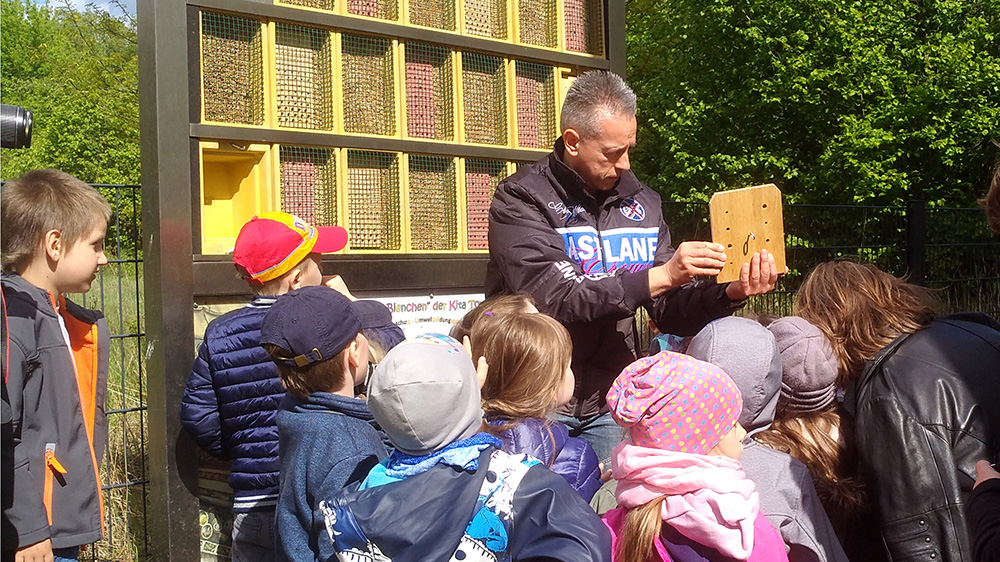 The wild bee wall in the Kindergarten Torgauer Straße in Berlin Marzahn Hellersdorf.

The project is a breeding wall with different types of breeding tubes where children can observe the development of the wild bees. They learn a lot about these important native insects and about the measures to be taken to better protect them. This year a similar wall was installed in a kindergarten in Berlin-Marzahn.

Women make up almost two-thirds of Vattenfall's Executive Group Management. What difference does it make to one of Europe's leading energy companies? We asked the male minority.

On Thursday morning war broke out in Europe. Vattenfall’s President and CEO Anna Borg, comments on the situation.