You need to enable JavaScript to get the full functionallity of this site.
Skip to content Go to main navigation
News History 11 October 2019 5 min

After 50 years of operation, the Reuter CHP plant's Unit C is now being decommissioned. Through war and peace the site has supplied power and heat to Berlin and it is now making an important contribution to Berlin’s coal phase out.

When it was commissioned on December 1, 1969, with an installed electrical capacity of 132 megawatts and 169 megawatt heat capacity, Reuter C was Berlin’s largest power plant unit. For five decades it has made a significant contribution to securing heat and electricity supply in Western Berlin.

While the coal era at the Reuter power plant is now ended, the site will now play a key role in Vattenfall's planned coal phase-out in Berlin by 2030, and a range of ideas for further development are already underway or in the trial phase at the site. Vattenfall Wärme Berlin is investing just under EUR 100 million in the overall project to replace the Reuter C hard coal unit.

Recently, Vattenfall commissioned Europe's largest power-to-heat plant on the Reuter West site. The power-to-heat system is to produce and store heat from excess electricity generated by renewable energy sources and is an important component of the Berliner Wärmewende  making the decommissioning of the Reuter C unit possible.

Vattenfall and the Swedish company SaltX Technology are also testing the extent to which excess green electricity from wind or sun can be stored in salt in the form of heat at the site.

It all started 90 years ago at the Spree river

The C unit was inaugurated in 1969, but energy generation at the Reuter site actually began 40 years earlier. 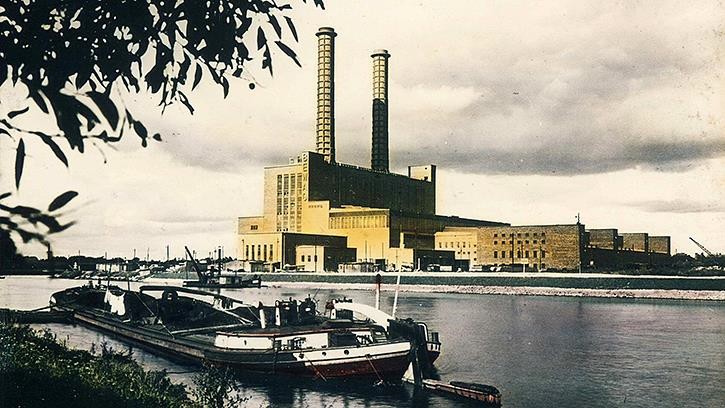 The West Power Plant – with a total capacity of 185 MW – went online at the first expansion stage in 1930.

As part of a joint concept of the Berlin municipal authorities and Bewag (the former Berlin energy supplier) for the long-term supply of electricity to Berlin, the then West Power Plant (later renamed Reuter) was built in the period 1929 to 1932 as a counterpart to the Klingenberg Power Plant, which was already in service. 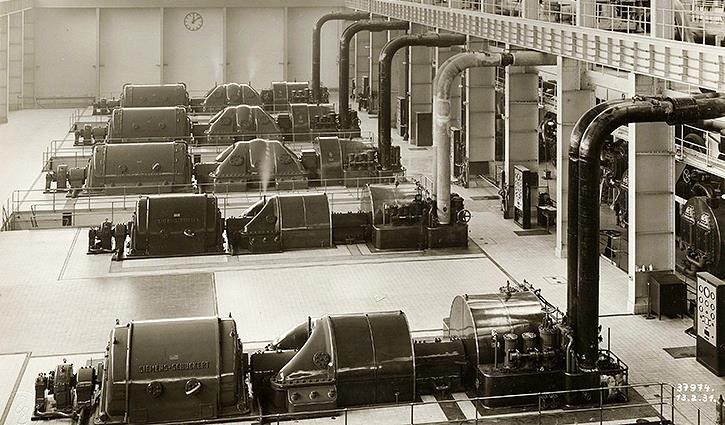 The machine hall in 1931, equipped by Siemens-Schuckert-Werken

The entire design and implementation of the power plant was entrusted to Siemens-Schuckert-Werke.

In terms of technology, the West Power Plant was the most advanced and efficient of its time. 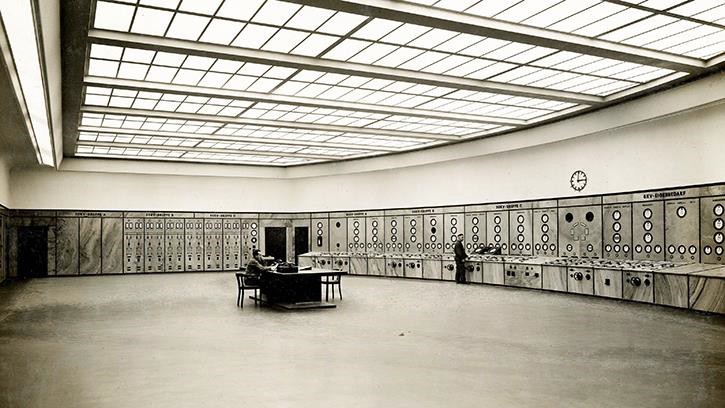 The control room in operation, December 1930

The power plant was further expanded from 1942 to 1945. In 1943 the boiler house was extended by over a third of its existing space towards the river Spree, and a third chimney was erected. Boilers and turbines were installed in the new part of the building.

Occupied and shut down by Soviet troops

Approximately 70% of the project was completed by the start of 1945. During the final days of the war, the plant was occupied and shut down by Soviet troops on 26 April 1945. The complete dismantling of major power plant components by the Soviet army started shortly afterwards. 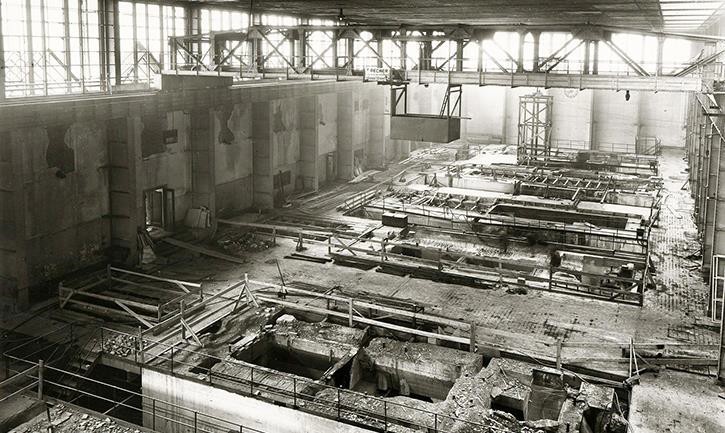 By the time the Allied forces assumed command on 7 June 1945, the buildings had been transformed into a huge field of rubble; the heart of the power plant was completely destroyed and Berlin lost 224 MW of capacity.

A new plant rises from the ashes

On 1 October 1945, Bewag submitted an application to the British Supreme Command for Berlin (its governing body) to reconstruct the power plant with a capacity of 184 MW. After several years of negotiations without agreement, the British military government issued the order for the plant's reconstruction on 12 April 1948. The commissioning date was scheduled for 1 November 1949. The work orders included elements of extreme urgency. 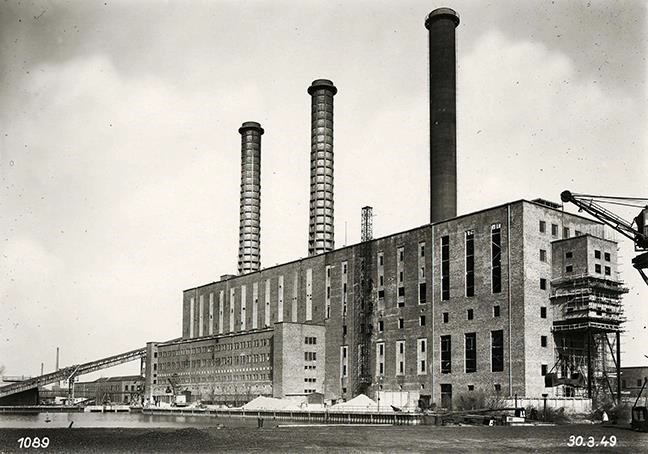 Work at the construction site started one week after the order. Topping out was celebrated in record time on 23 October 1948, just four and a half months later. The interior fittings and mechanical installations were scheduled to start at that point.

Soviet blockade of the western sectors

To exert political pressure, the Soviet military administration for Germany imposed a total blockade of all roads, waterways and railways to and from the three western sectors and cut off all power lines on 26 June 1948. This created an explosive and economically catastrophic emergency situation, to which the three western powers responded by quickly setting up an enormous airlift to supply businesses and residents in their sectors of Berlin. 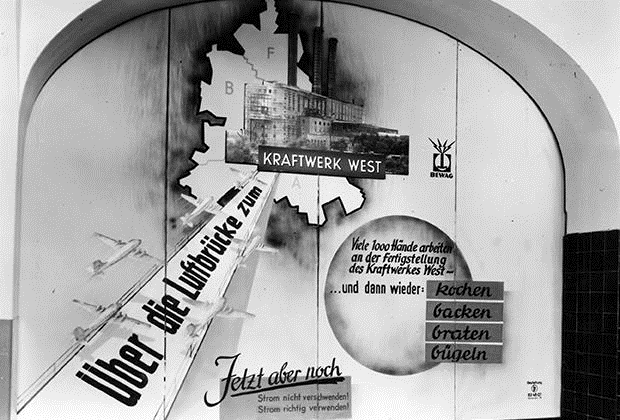 Poster calling to reduce electricity consumption during the airlift, posted in U-Bahn stations in April 1949

The ordered and already paid-for boilers, boiler frames, turbines and other parts were in storage at the manufacturer's premises. Under the prevailing conditions, air transport was the only option. A team of experts from Siemens-Schuckert-Werke worked day and night to dismantle the components for air transport without affecting their usability.

Suitable aircraft were made available on the order of American General Lucius Clay, the military governor responsible for the American sector. He was the initiator and commander in chief of the airlift, which allowed a major logistics operation to start on 6 April 1949. During this operation, 1,416 tonnes of steel and equipment for the West Power Plant were flown in on 580 airlift flights. This did not include the many tonnes of firebrick required for the boiler linings, the mortar, and other building materials.

The blockade ended on 12 May 1949. Due to the still uncertain flow of goods and schedule pressure for commissioning of the power plant, the airlift continued until the end of August 1949. 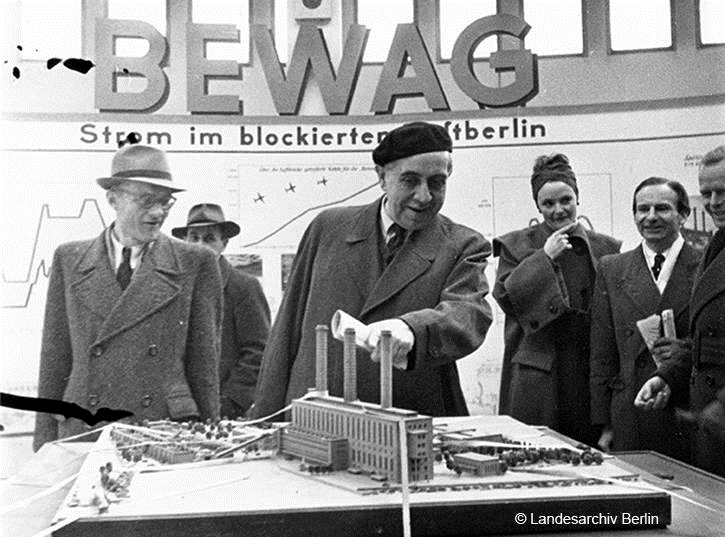 When Ernst Reuter, who was also Chairman of the Supervisory Board of Bewag for many years, died on 29 September 1953, the West Power Plant was renamed Reuter Power Plant in his honour.

Heating of Amsterdam: every source needed

Vattenfall's largest heat grid in the Netherlands is located in the Amsterdam area. Presently the main heat source is gas, but plans are to use all available fossil free heat sources to rep...