You need to enable JavaScript to run this app.
Skip to content Go to main navigation
News E-transport and charging 10 October 2019 5 min

Maud Diepeveen, team leader, and Maxime Croft, engineer and driver of the Nuna X solar car are ready for the Bridgestone World Solar Challenge next week.

On 13 October, the Vattenfall Solar Team and its car Nuna X will defend their title at the Bridgestone World Solar Challenge, a 3000 km long solar-car race across Australia’s deserts. The team consists of 16 students from Dutch Delft University of Technology, a team that has won the race seven out of nine times before. This year, a big part of the responsibility for a new success lies with Maud Diepeveen, team leader, and Maxime Croft, structural engineer and one of the NunaX drivers.

Can you tell us a little about your background?

Maud Diepeveen: "Ever since I was a child I wanted to be a doctor, but when I had to choose a study programme I opted for something involving more research. That was nanobiology at Delft University of Technology."
Maxime Croft: "In middle school I was interested in physics and biology, and the clinical technology programme at TU Delft looked like a good fit. However, it turned out to be much more about medicine and not so much about physics. This is why in my first year I switched to the mechanical engineering programme, as you have a better chance of getting your hands on design projects."

What was the main reason for you to join the Vattenfall Solar Team?

Maud Diepeveen: "Along with my studies, I wanted to do something challenging, and being the team leader of the Vattenfall Solar Team looked like a good option. I find the different methods people use to address a problem or approach a situation very interesting. Everyone does this in their own way. It's really great to work with the team in pursuit of the same goal and find an effective way of working together, even though everyone is different."

Maxime Croft: "When I started my studies in Delft, I knew right away that I wanted to be part of this dream team. Designing your own vehicle looked to me like a wonderful challenge. What I especially like about the Vattenfall Solar Team is that it is a small, close-knit team that performs at the top level and deems sustainability to be very important. In my role as structural engineer, I am a driver and I can help build the car. That's fantastic!"

Maud Diepeveen, what specific traits do you think you need to have as the team leader?

Maud Diepeveen: "As the team leader, you primarily need to have a good sense of empathy. If you understand how the team members feel, they are much more likely to be comfortable, and then they perform better. It is also important to have a positive attitude, be able to handle criticism, and always be open for discussion."

"Gender is not an issue here. What matters is having the best person for the job, and in this case it was a woman. I can easily put myself in the position of someone else, which makes me a good listener. This way, I try to read the mood of the team members and give them room to tell me what concerns them or what bothers them."

And you, Maxime, as the only female driver?

Maxime Croft: "It's very simple: I'm small and slender. The cockpit of the NunaX is shaped around the driver, and a smaller driver means less wind resistance. Besides that, I support the team with enthusiasm and a positive attitude, which is how I try to solve problems." 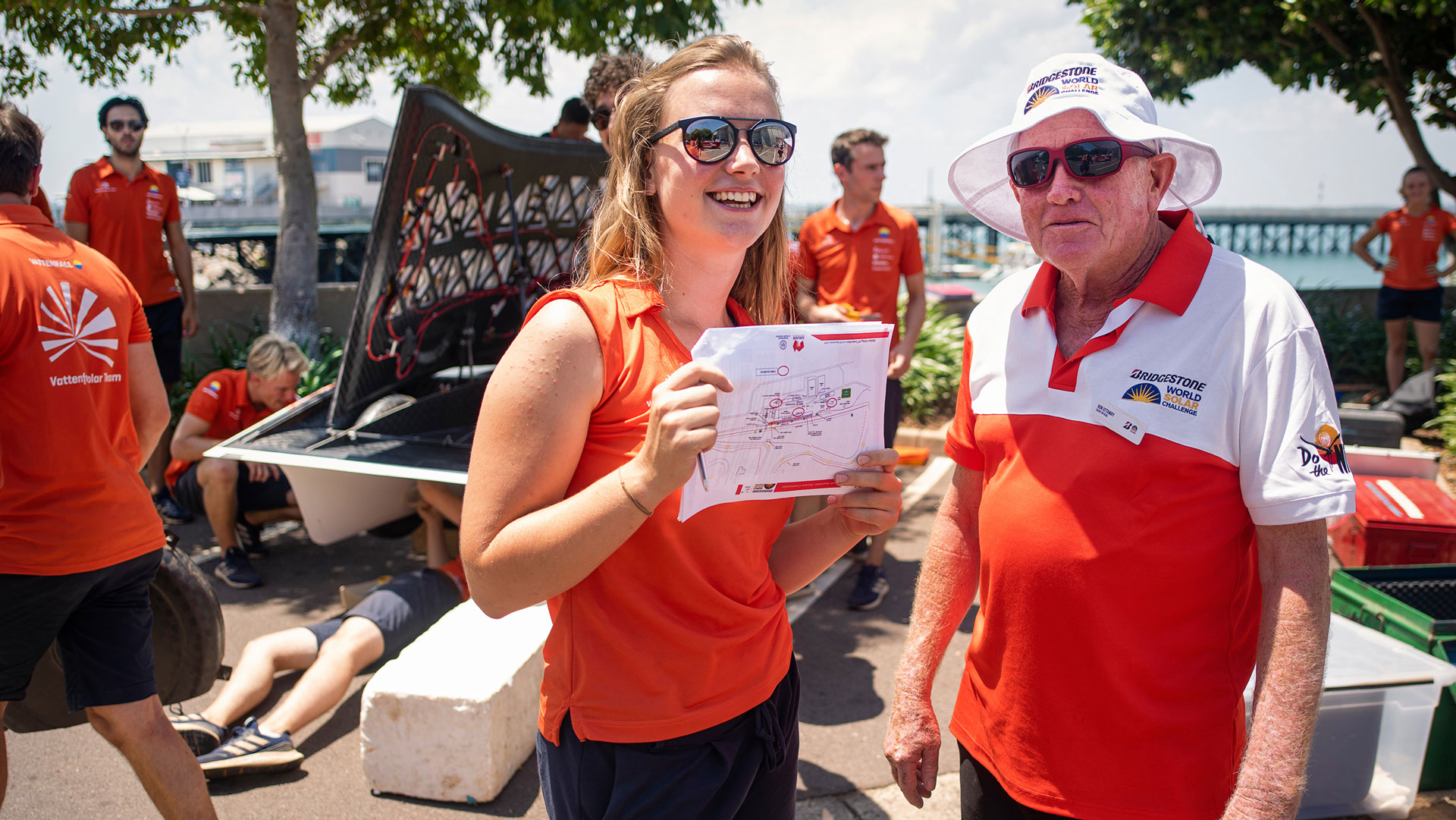 Which of your traits are truly special?

Maud Diepeveen: "Encouraging the other team members."
Maxime Croft: "I contribute to the good mood in the team, but if there's something really special about me, it's my eye for detail in the finishing of the NunaX."

What are your most important tasks?

Maud Diepeveen: "As the team leader, I help the marketing experts find partners to sign up for the project. I also handle quite a few peripheral matters, which helps to maintain a good working environment. In Australia I prepare the team for the race and support them during trials."

Maxime Croft: "I am mainly involved in designing and building the carbon fibre body of the NunaX. The aerodynamics determine the appearance of the NunaX, and my role is to make this shell strong enough with the least possible weight, so that all components can be secured to the support structure."

Do your see yourselves as role models for other students?

Maud Diepeveen: "I think it is worthwhile for other people to do something different alongside their studies. As a member of the Vattenfall Solar Team, you develop both your engineering skills and your people skills. I can be a role model for other students that take this opportunity, but I don't see myself that way."

Maxime Croft: "Building the NunaX is where my passion lies; being able to work together with this incredibly motivated team is a fantastic experience. I do hope that everyone has the opportunity to fulfil their passion, and perhaps I can be an example for other students in this regard."

What have you learned up to now in the project?

Maud Diepeveen: "Learning to deal with different types of people. Good communication helps to avoid a lot of problems. I have also learned that you can overcome many issues by working hard and adopting a positive approach to things."

Maxime Croft: "I have learned much about technical things, such as how forces act in a structure and how you can accommodate them as efficiently as possible. I am also learning a lot about collaboration with other disciplines. For example, while the aerodynamics determine what the exterior shape looks like, the mechanical engineers need to have enough space in the structure to install their mechanical systems. This is a constantly recurring process, with the best solar car as the end result."

Sweden and Germany are leading the development for electric roads

Germany and Sweden are world leaders when it comes to real-world studies on electric roads. On Gotland, the world's first wireless e-road has been finished.

Vattenfall is teaming up with the Vattenfall Solar Team again this year to try and win the World Solar Challenge title. After this race – which is set to take place in Australia in October –...

Anna-Karin Stenberg has been appointed as new Senior Vice President and Head of Business Area Markets and member of Vattenfall’s Executive Group Management (EGM) as of 1 January 2021. She ha...