You need to enable JavaScript to run this app.
Skip to content Go to main navigation
Story Wind 19 November 2014 7 min

More and more Vattenfall employees are working at sea. The wind and weather out there are often more violent than on land, and if things get really rough, you need to be very well prepared. It is simply a matter of survival!

Like a cork, Bjarne Christesen bobs up and down on the high waves, clad in an orange survival suit. Together with nine others, he battles through a howling storm with pelting rain, lightning and thunder to reach a luminous life raft that seems an interminable distance away. The location could be the rough waters of the North Sea and the ten men and women in the water the remainder of the crew of a foundered vessel that was supposed to bring them to the offshore wind farm.

There in the surging water, Christesen finds it all realistic enough to be just a little alarming. In reality, he is in the Falck Safety Services’ 1,200-cubic-metre basin near Esbjerg, Denmark, and taking part in the mandatory sea rescue course for offshore workers. The rain emanates from a sprinkler, set up in front of a massive wind machine, which creates the “storm”. The rough seas are the work of a powerful wave generator. This is the only salt-water basin in Europe, giving it the same buoyancy as the sea – a requirement of the Swedish special army and police forces who, like the Danes, train at the Esbjerg centre.

The ten orange-clad figures in the water are part of a growing band of offshore workers who brave the dangers of the sea every day so that your cooker, TV and the lamp above your table can run on green energy from gigantic offshore wind turbines. Everyone wants clean energy – though few want a turbine in their neighbourhood. Turbines are therefore increasingly sited out at sea, where the service technicians have to work under completely different conditions. You can not just take your car home after work and, if disaster strikes, you do not just call an ambulance.

Christesen is a trained electrician and wind turbine service technician for Vattenfall, and one of the participants in the course. “The sea doesn’t always behave as we would like it to. We must learn to respect the sometimes violent environment we work in,” he says. “Falling into the water may seem a fairly innocent thing, but it can put your life in danger if you don’t know how to react or are not wearing the right clothes to withstand several hours in these waters. And the dilemma is that no-one really knows how they will react if something like this happens to them. The course is designed to give us confidence in our ability to cope in the water so that we don’t panic in an emergency.”

Normally, the employees reach the turbines by boat. If the weather is so bad that a boat cannot get to the turbine foundation, the service technicians use a helicopter. “And it can happen that fog and wind, for instance, prevent the helicopter or the boat from getting us back,” Christesen explains. “Then we just have to get our sleeping bags, mattresses and the evening meal – protein biscuits and water – out at the base of the turbine before we bed down 70 metres above the sea in the turbine housing whilst waiting for the weather to clear up.” 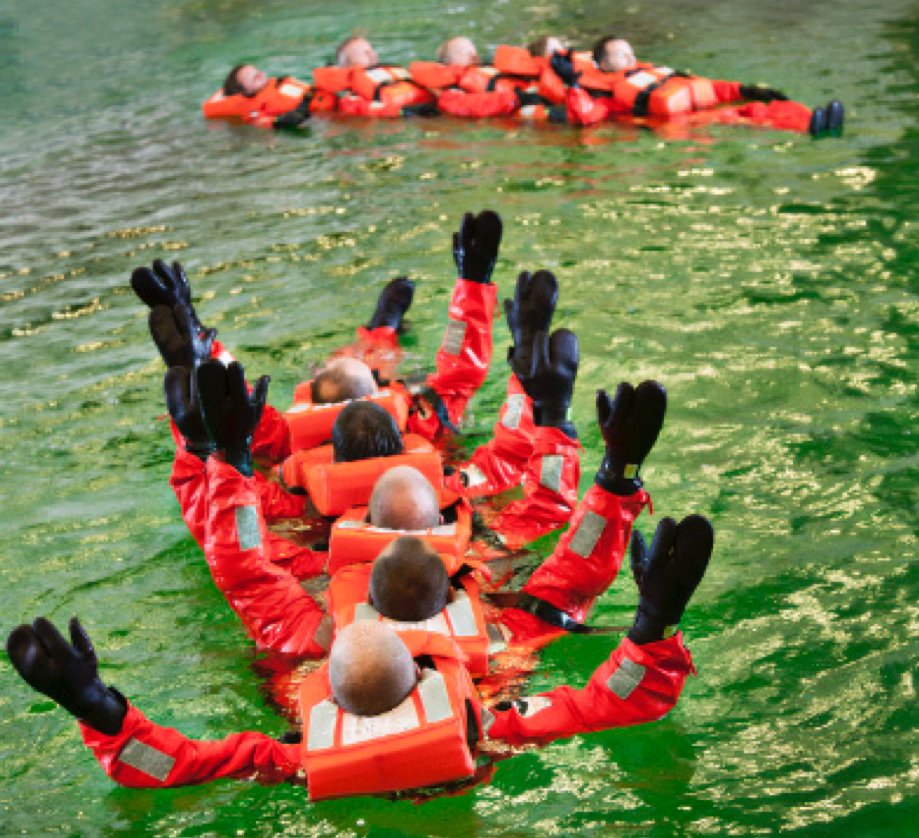 Synchronous backstroke swimming is a special survival discipline that needs to be trained.

The ten participants had spent a day in the classroom and are now testing their knowledge of the theory. Donning a survival suit with its close-fitting rubber cuffs and large built-in boots is the first tricky challenge of the day. This is followed by a three-metre leap into the water from a tower, which is meant to represent the side of a ship.

Plop, plop, plop – the course participants disappear into the green water before resurfacing amidst a froth of air bubbles. They practice adopting the foetal position – which reduces heat loss from the body – and then join up in two long chains, gripping each other with their legs and using rhythmical strokes to reach the life raft on their backs. On the open sea, it is crucial that you keep together and can help each other. By an “unfortunate chance” arranged by the instructors, the raft is floating the wrong way up. Ole Bigum, Vattenfall’s Offshore Project Director, must prove he is up to the job of flipping it over single-handedly. He has to scramble and pull his way up onto the bottom of the raft before pulling it back over himself, ultimately submerging himself underneath it. A few seconds later his head reappears beside the raft, to everyone’s relief.

“To work at sea, you have to be physically fit, both for your own and others’ sake. In the everyday run of things, it is a safe workplace!” Christesen stresses. 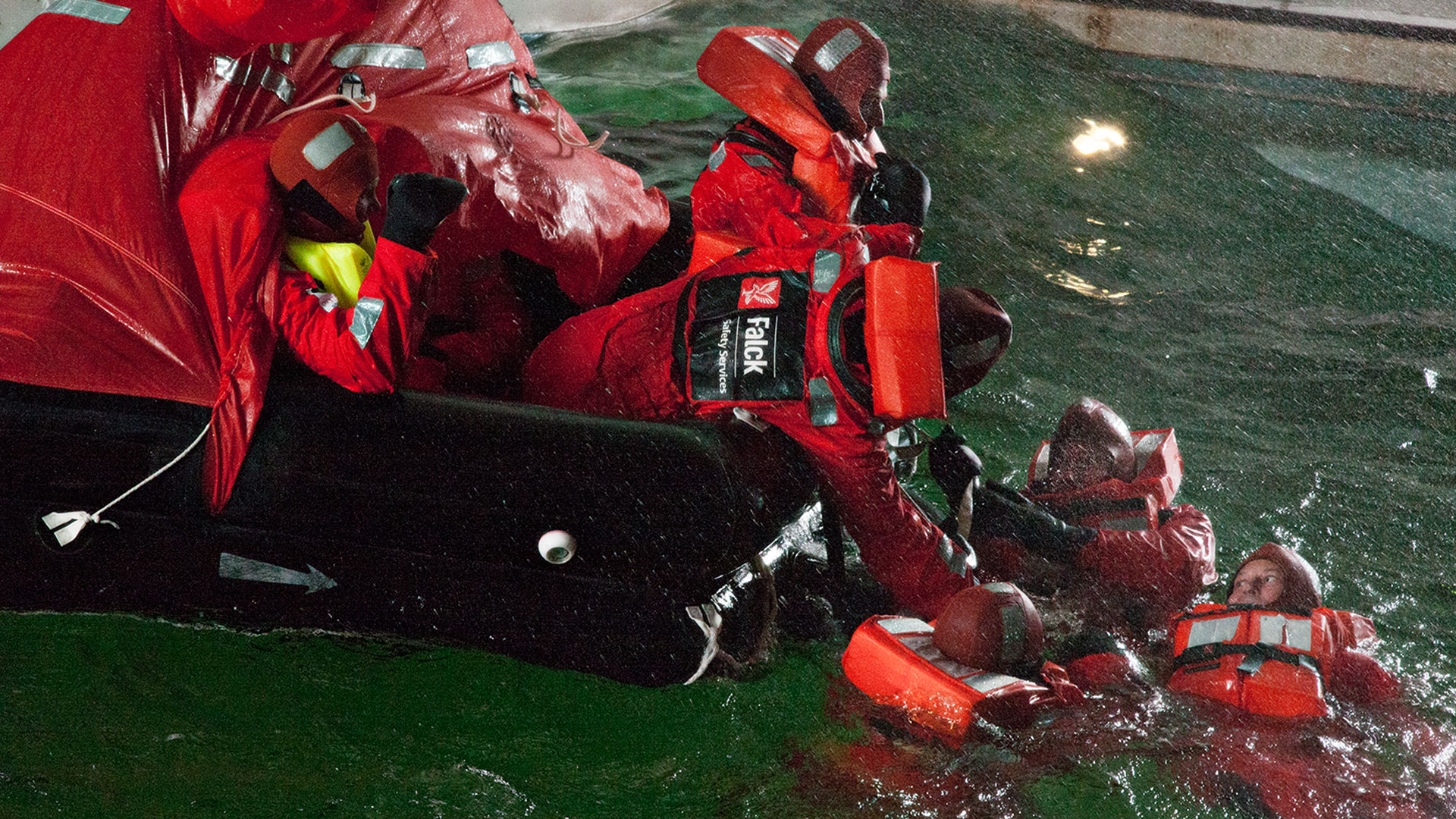 According to Jesper Jonø, a sea rescue safety advisor at Falck Safety Services, the North Sea waters are on a par with the Bay of Biscay, to the west of France, in terms of difficulty. “They are shallow, which means that large waves from the Atlantic can rise to four or five metres in the area around Vattenfall’s turbines. Choppy seas make sailing more difficult. Then there are also strong currents that sweep you along if you fall into the water.” This last aspect is the one thing that the basin cannot replicate. Christesen says that “if you fall into the water from a turbine, you mustn’t fight the current, but try to make your way towards the next turbine in the line – and really hope that you weren’t on the last turbine in the array, because then your next stop is England.”

All Vattenfall employees are equipped with a crew finder, a device that sends emergency signals when activated.

Even when the course participants have overcome the “raging storm” in the basin and are all aboard the rescue raft, tossed around by the waves, the instructors have other surprises in store for them. Suddenly, the throbbing sound of helicopter rotors can be heard. One by one, the participants grab the sling lowered down to them and they disappear swinging their way up to the overhead crane that simulates the rescue helicopter. 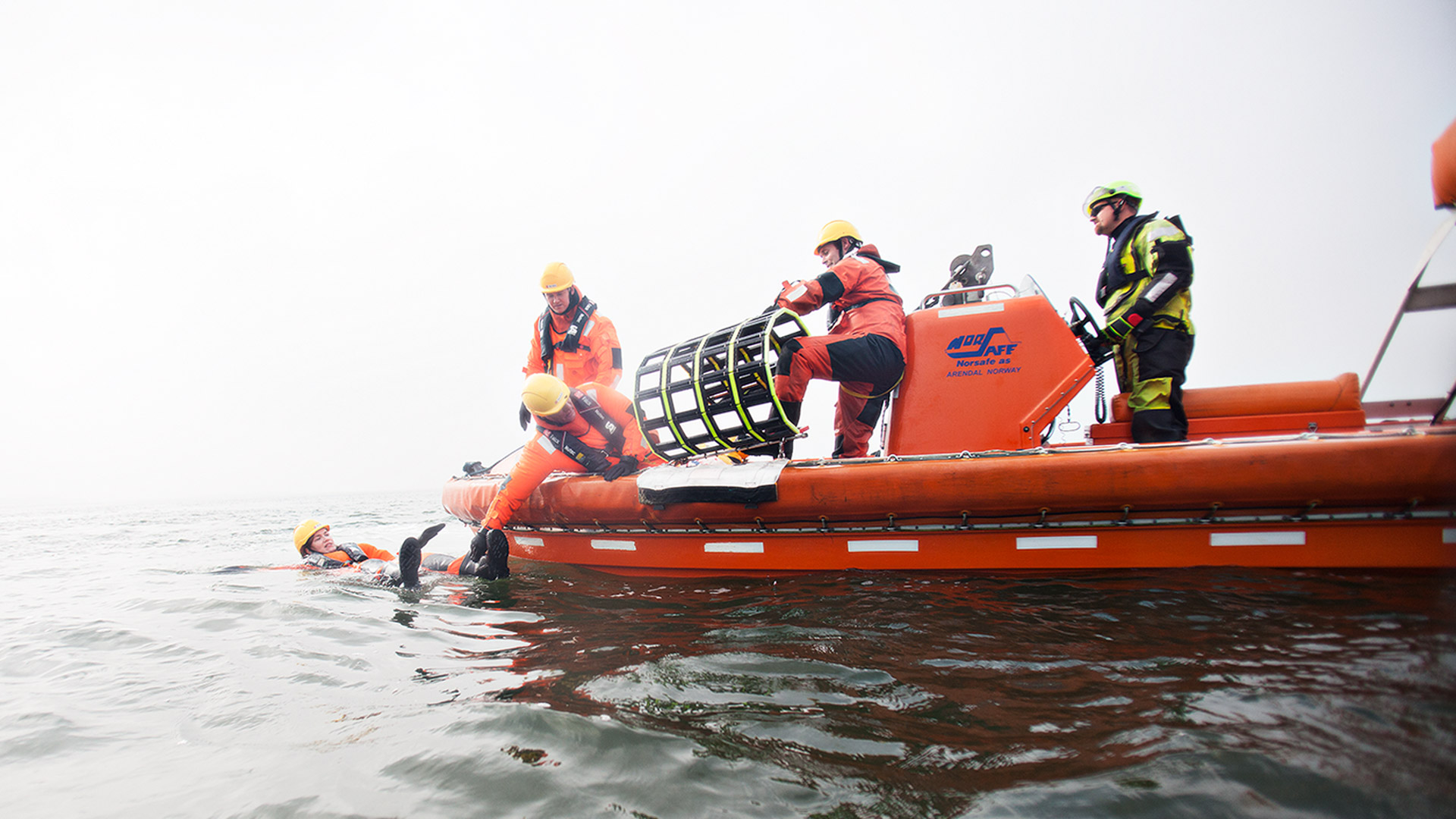 Participants in the course demonstrate rescuing a colleague at open sea with a rescue cradle.

The final practical exercises take place in two powerful motorboats, which leave Esbjerg harbour at high speed and head out to the open sea. Participants must now demonstrate that they can move from one vessel to the other while travelling at high speed and that, working in pairs, they can lift a stricken colleague from the water using a special lamella mat to literally roll the person in distress on board with little effort. There is a collective sigh of relief from many of the participants when, at the end of the afternoon, they can finally strip off their survival suits, having proved that they can climb between the boat and a turbine base without ending up in the water. All the participants leave the course with the sought-after little plastic card which permits them to continue working at sea.

Want an even better impression?

Cold shock
When landing in water, even up to 15 degrees Celsius, you lose control of your body for about one minute. At this stage, you are hyperventilating, which increases the risk of drowning.

Drowning
A victim may drown after a short while in the water, or right up to 24 hours after being rescued if they were breathing in saltwater particles over the course of several hours. This can stimulate the production of water in the lungs so that the victims drown in their own body fluids.

Hypothermia
You lose feeling in your hands and your fingers, and begin to shake. At a body temperature of 35 degrees Celsius or below, you die from cold after a while.

Vattenfall will for a period of several years provide balancing services and market access for the ‘Markbygden Phase II North’ (“Markbygden”) wind farm located in the municipality of Piteå i...