You need to enable JavaScript to get the full functionallity of this site.
Skip to content Go to main navigation
Story Wind 8 June 2017 5 min

Vattenfall donates 4,000 portions of food from DanTysk offshore wind farm to an organisation for the homeless. 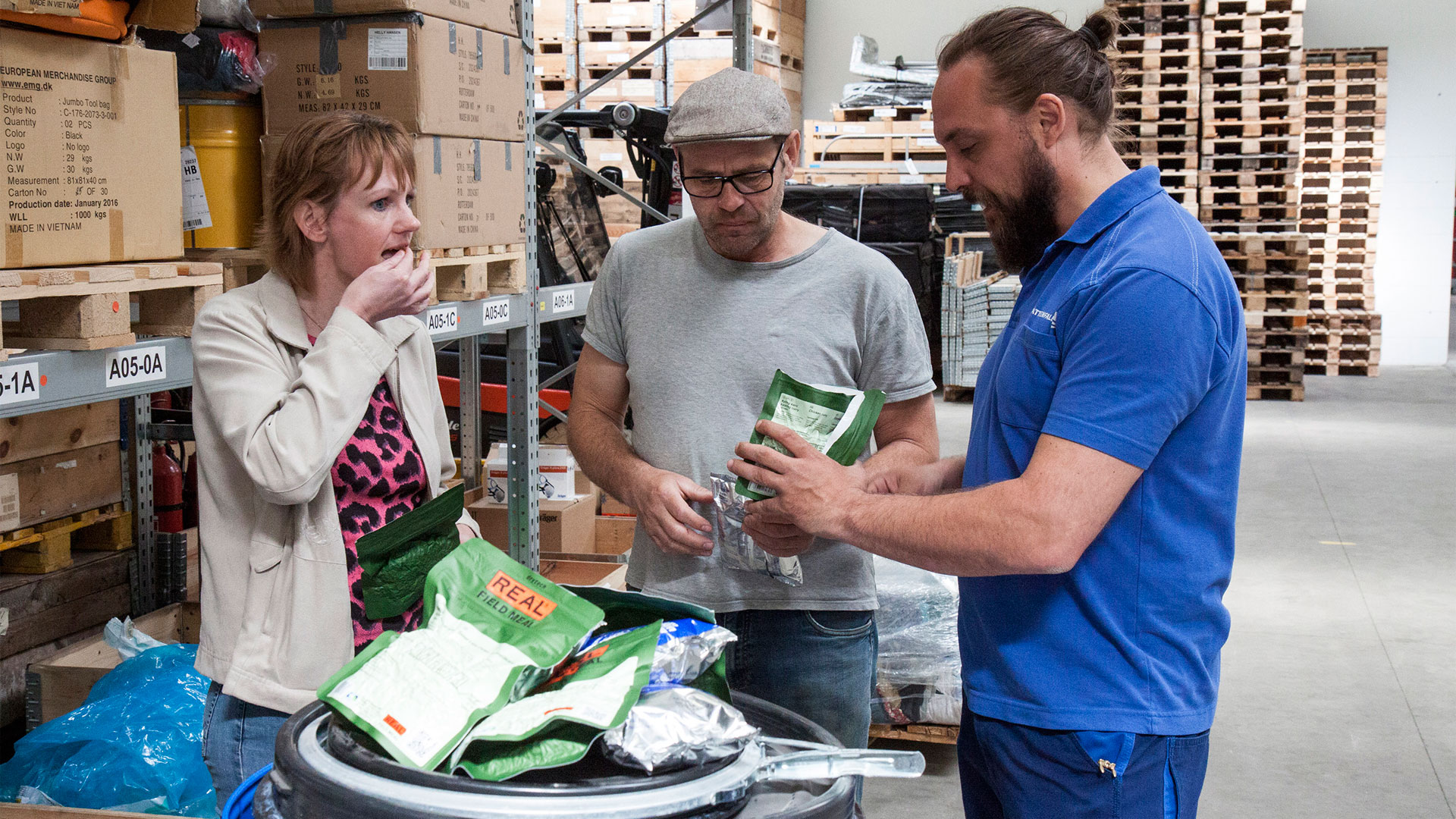 Somebody must be able to use all that food, but who?” was the first question Service Leader at Vattenfall’s DanTysk offshore wind farm, Jason Davidsen, asked himself, when he was given the responsibility of replacing the emergency food and water supplies at the wind farm.

”I am generally against food waste and couldn’t really live with the food being destroyed. Therefore, I tried to find an alternative use for the many bags of good food and water. I found the local organisation “De Hjemløses Venner” (Friends of the Homeless) in Esbjerg which works with homeless and socially marginalised people there, and when I contacted them, they immediately accepted the donation. They were happy to pick up the food and water from our warehouse and distribute it to those who don’t have so much,” Davidsen explains. 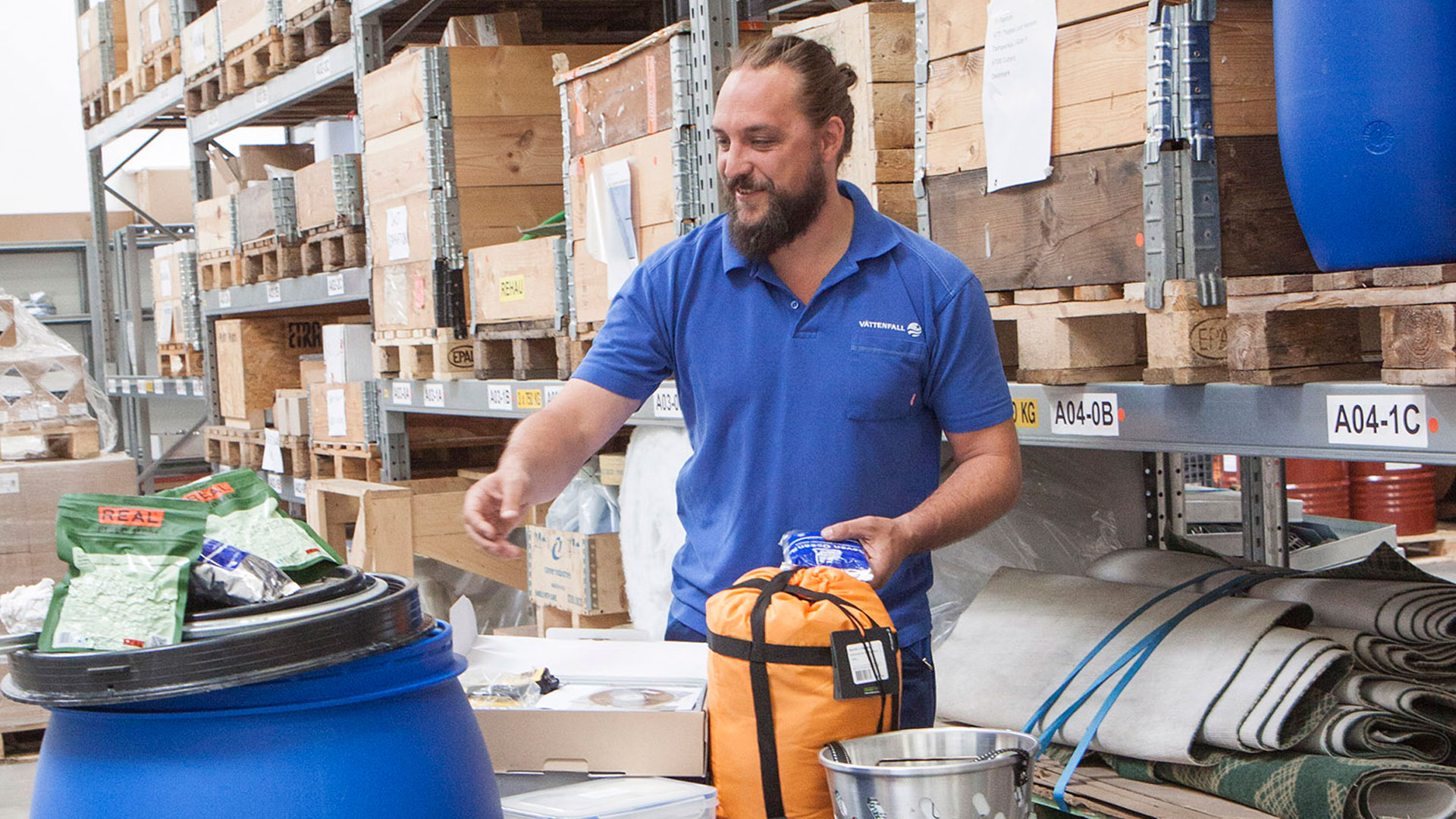 Jason Davidsen with the full emergency kit that is to be replenished with food and water, new batteries for the electrical equipment and, in general, get a thorough inspection before being returned to the North Sea.

All in all, the turbines in the DanTysk offshore wind farm hold some 5,000 portions of freeze-dried food in vacuum bags and 5,500 bags of water that are coming to the end of their “best before date” and therefore need to be replaced. They are part of an emergency kit, placed in barrels in each turbine at the DanTysk wind farm to be used if technicians are prevented to leave, because of a sudden weather change or a defect on the transfer vessel

“Fortunately it is extremely rare that service technicians are not able to get away from the turbine. But if it happens, six people must be able to survive for four days in the turbine with what is stocked in the emergency kit,” Davidsen says.

The kit also contains an emergency radio, sleeping bags and insulation mats, a dry toilet, a field stove, plates and cutlery, storm matches, distress flares, a signal pistol; well, the list is endless – all the way down to playing cards to pass the time. 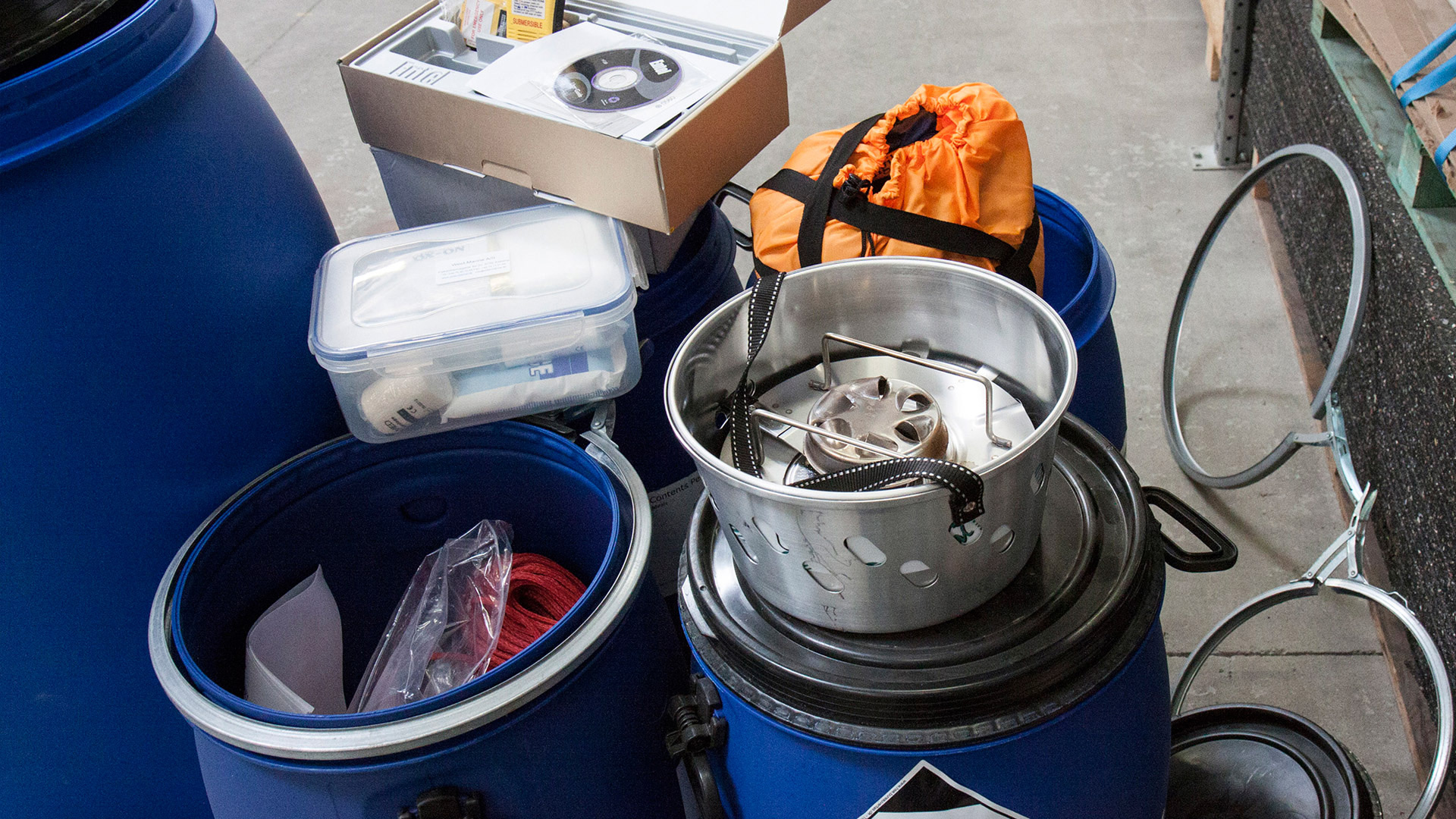 The emergency kit among other things contains emergency food and water supplies, an emergency radio, sleeping bags and insulation mats, a dry toilet, a field stove, plates and cutlery, storm matches, distress flares, a signal pistol and a deck of playing cards.

At the end of May, the Esbjerg homeless organisation picked up the first bags of food and water, and according to the manager of the organisation, Ingelise Wenzel, these were already distributed in the afternoon.

“It is now the end of the month, and many of those who live in difficult circumstances, no longer have money for food. The social benefit is often not enough, and the meals we have distributed now will help them to cope for the rest of the month,” says Wenzel.

Wenzel is confident that ”De Hjemløses Venner” can easily make use of the many bags of food, especially because they come in on a regular basis.

”We are incredibly happy that Jason and Vattenfall have started this initiative. It is so important that companies take a social responsibility in the local community,” Wenzel concludes. 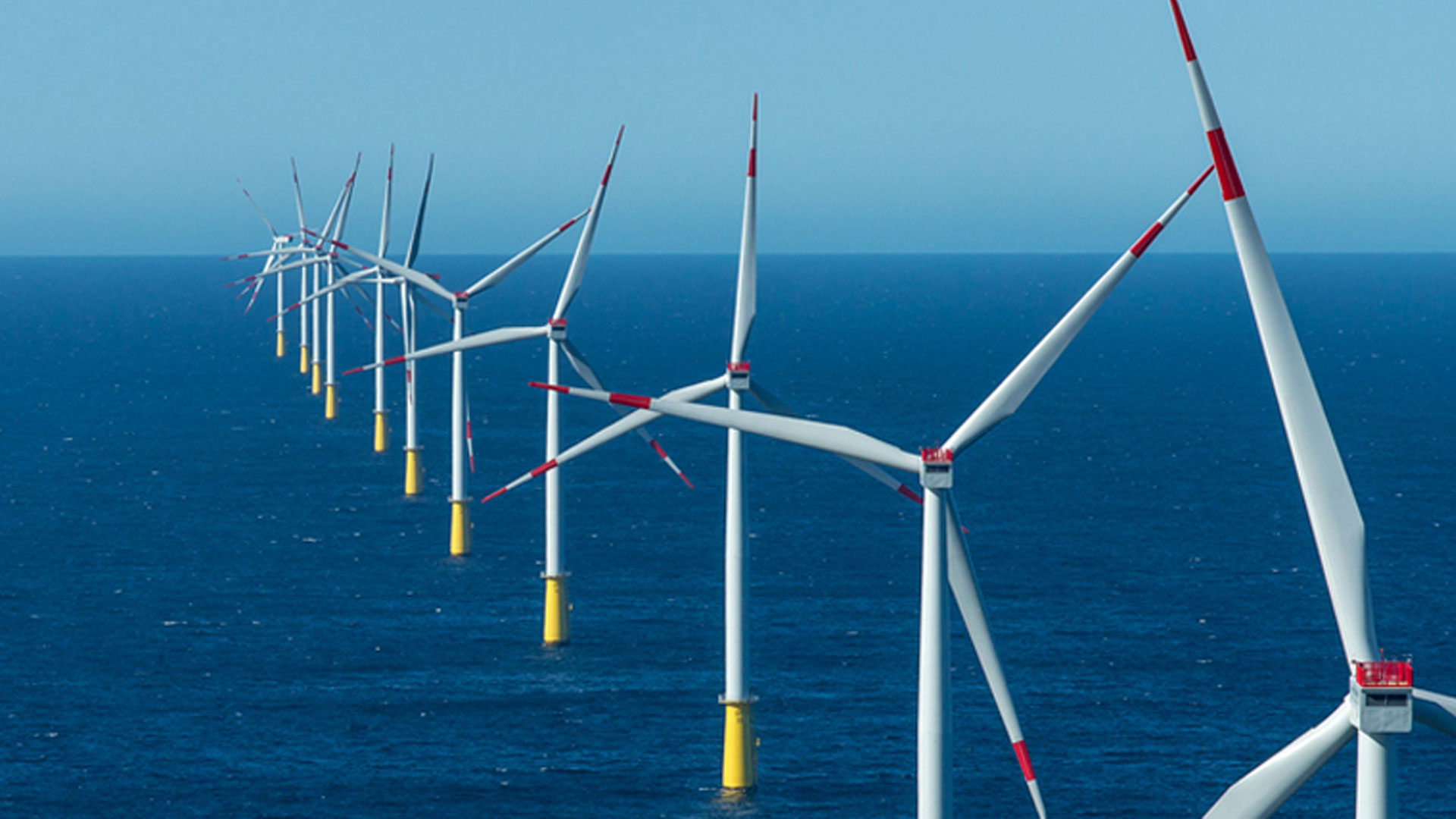 7½ involuntary hours in a wind turbine in the North Sea

The German service technician René Peters is one of the few people to have experienced an involuntary stay in one of DanTysk offshore wind farm’s turbines. He has worked in the wind sector for some 14 years, the latest two at Vattenfall. 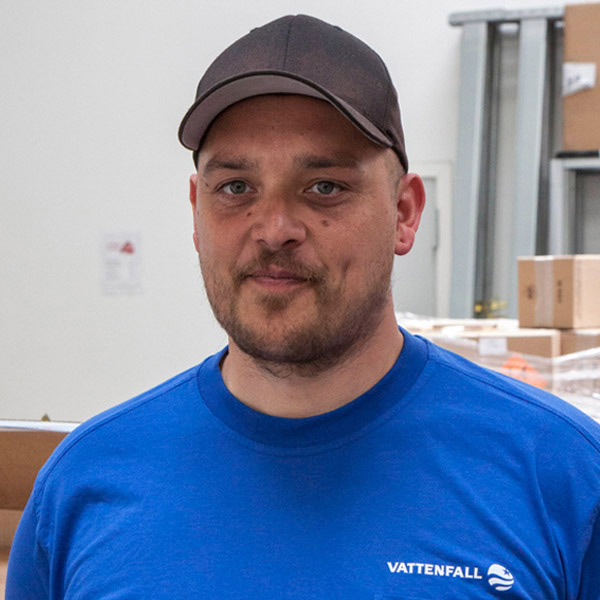 René Peters remembers the day, he got stuck in a wind turbine in the North Sea together with two colleagues from Siemens in January 2016.

”Jokes are always cracked about getting stuck in a wind turbine, like when new service technicians join the team. But in reality, it is extremely rare that you cannot get away from the turbine.”

Half an hour before the boat was supposed to pick us up at 5.30 p.m., we were told over the radio that the transfer vessel’s rudder had a defect, and that there were no other boats in the area that could come and get us back to the hotel platform. One hour later, the weather started to get worse, and the weather forecasts spoke of three days of bad weather, so we crossed our fingers that we could get back to the platform, before it got too bad. Maybe by helicopter.

It also started getting cold. There was no heat, because the turbine didn’t work, so we decided to leave the nacelle and climb down to the bottom of the tower to the barrels with the emergency supplies. Out came sleeping bags and insulation mats and the camping burner, so that we could prepare some food. The menu has a selection of chili con carne, chicken or pork with rice or noodles. It tasted really good.

We always bring a WiFi router to the turbine, so that we can send and receive information, reports and other information necessary for our work. It now came in handy allowing us to spend some time checking Facebook and emails. The rest of the time was passed chatting about all sorts of things.

Luckily they managed to repair the boat, so that they could take us back to the hotel platform around 1 a.m. We were fortunate not to experience a storm like the one we had last Christmas with 17-metre waves, when you were not even allowed to go outside on the hotel platform.

We learnt that the emergency supplies serve an important function, and that someone has actually given the contents of the barrels some serious thought.”

De Hjemløses Venner (Friends of the Homeless) was founded in 2003 and offer assistance to homeless and other socially marginalised people in the municipality of Esbjerg. The association receives funds from membership and through foundations, events such as a company golf tournament, art auctions, etc. The association also runs the “Fill a Fridge” project where people donate 400 or 800 Danish kroner to fill less fortunate peoples’ fridges.

Vattenfall has chosen Hvide Sande Harbour as its service port for Vesterhav Syd and Nord wind farms. Hvide Sande will to be the service hub for Vattenfall’s Danish offshore wind operations i...

Vattenfall has signed its first power contract for wind farm Hollandse Kust Zuid. Air Liquide will purchase 100GWh of fossil-free electricity per year from the wind farm located off the Dutc...