You need to enable JavaScript to get the full functionallity of this site.
Skip to content Go to main navigation
News History 18 November 2013 7 min

Berlin’s electricity grid was divided into East and West for almost forty years. When the Berlin Wall fell, the city began the process of reunifying its power grid system. Ulrich Strasse and Uwe Reich look back at those turbulent years.

Ulrich Strasse, Head of the Berlin Mitte medium and low-voltage grid operated by VE Netzservice GmbH, remembers the day after the Berlin wall came down like it was yesterday. It was a Friday and the then 34-year-old in charge of East Berlin’s forty-two substations was asked whether his employees had shown up for work. “At that time there were over 100 employees working in my area,” he explains. “‘They are all here,’ I immediately answered, even though I had no idea if it was true.” Of course, the reality was very different. On 9 November 1989, history was made: the Berlin Wall, which had divided the city into East and West for 28 years, came down. Indeed, many of Strasse’s colleagues did not come into work that Friday, instead spending the day celebrating their regained freedom.

Nonetheless, the East Berlin power company decided to go ahead with its planned annual celebration on 10 November 1989 in Berlin’s Tierpark zoo. “Almost half of the seats were empty,” remembers Strasse, “of course we knew why.”

The fall of the Berlin Wall marked not only the collapse of the German Democratic Republic (GDR), but also the end of West Berlin’s status as an electricity ‘island’. On 5 March 1952 Soviet troops ordered the city’s western sector to be separated from the grid. Their official explanation was that the power cables running into the western sector were disrupting the GDR’s grid. West Berlin’s electricity provider Bewag was, therefore, forced to construct a separate system for West Berlin. From that moment on, West Berlin became an electricity island – disconnected from the grids of both West Germany and the GDR. Even the power used to run the underground train service – the U-Bahn, which crossed both East and West Berlin, was obtained from the two grids separately.

On 3 October 1990, the Germans celebrated the country’s political reunification. However, it would be another two years before Berlin’s power grid would be one again. Some two years later in December 1992, an emergency power line from the eastern part of the city was activated. The two-kilometre-long cable was set up to meet the increased demand for electricity in the West. If required, the East could feed additional reserves of power into the West. The cross-city connection was called into action just under two weeks later when a 300-megawatt unit malfunctioned in the Reuter West combined heat and power plant and Bewag’s isolated grid temporarily suffered a drop in output. For the first time, 220 megawatt of reserve power was supplied from eastern to western Berlin.

However, supplying western Berlin with power from the East initially had some strange results. Heating and video camera systems no longer came on at the correct time, and shopping centre doors and bank safe deposit boxes started opening erratically. It was an issue that made headlines in the daily newspapers and left experts puzzled: what was wrong with eastern German power? The phenomenon was apparently caused by frequency fluctuations in the East German grid. Its frequency sank when less electricity was being produced than necessary, which, for example, meant that clocks ran more slowly. When too much power was being produced, the frequency increased, i.e. clocks started running faster. This meant that electric timers sometimes had to be manually reset. “Apart from some slightly off clocks, this emergency power line made history. It marked the beginning of the consolidation of the city’s two power grids,” says Strasse. He has fond memories of these initial days of change and his first encounters with his western German colleagues. “There was a real sense of optimism – true euphoria. We were able to get involved, play an active role and be part of a once-in-a-lifetime, historic event. People were positive and open-minded, and we soon noticed that we were on a par with our colleagues in the West when it came to our technology, our knowledge and our experience.” 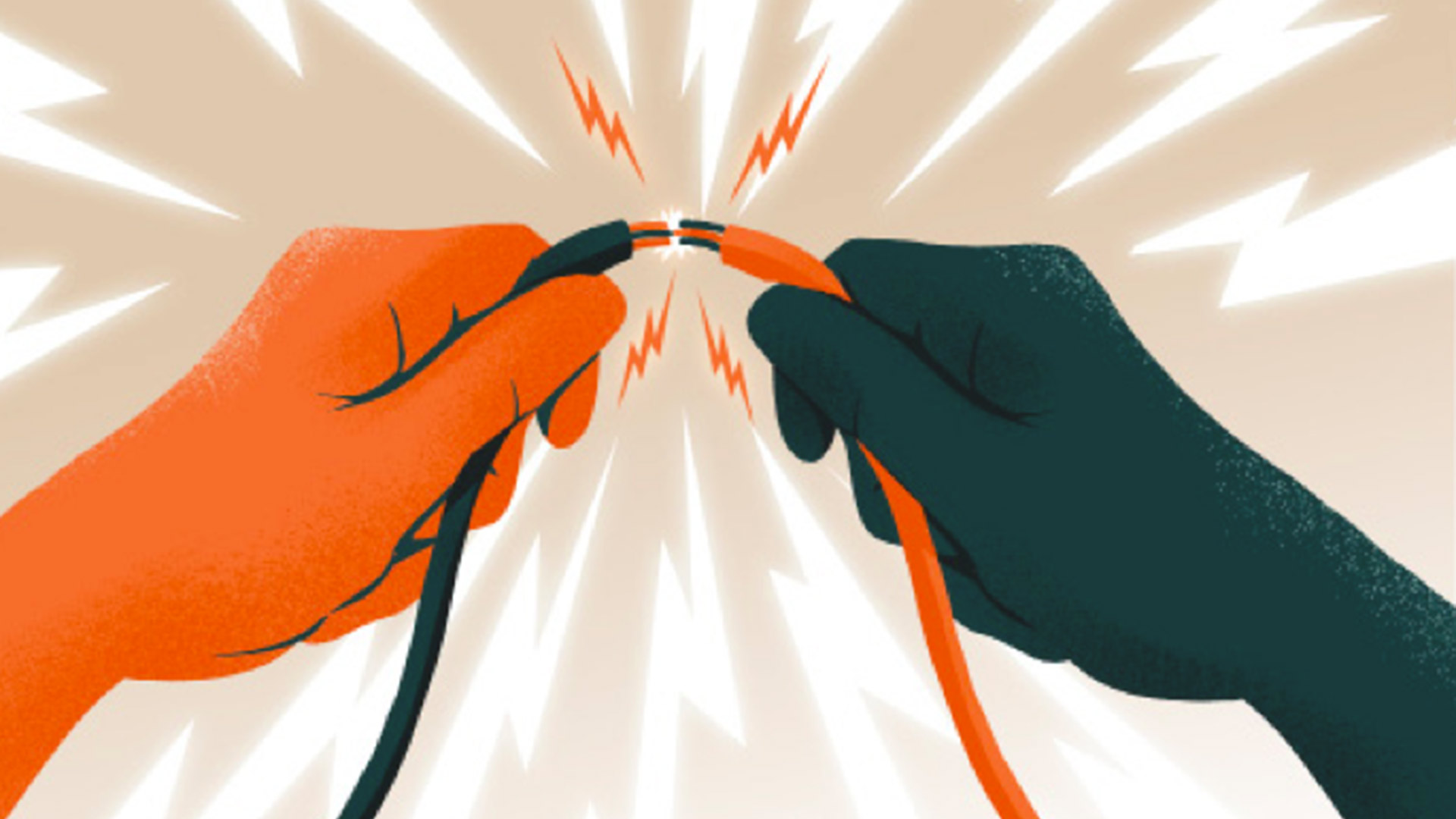 The emergency power line remained in operation for two years, but it did not connect Berlin to the regional network and the grid was still not permentantly reunited. During this time, the first trans-regional interconnection line was built: 170 kilometres of cable running from Helmstadt (near Hannover) to Berlin. On 7 December 1994 the 380-kilovolt interconnection cable went online, giving Berlin an effective trans-regional combined network connection and, after 42 years in isolation, incorporating it back into the western European electricity grid. Uwe Reich, now head of Berlin’s high-voltage grid at VE Netzservice GmbH, used to be in charge of load dispatch at Bewag in West Berlin and remembers those years well: “The commissioning of the line was broadcast live on television. At the request of Eberhard Diepgens, the mayor of Berlin at that time, the red button used to commission the grid was replaced by a black one. When the button was pressed, West Berlin stopped being an isolated grid: finally, after decades, it was reconnected to an integrated power network. Since the fall of the Berlin Wall, our aim had been to consolidate the two power grids, and on this day, we achieved one of our key milestones.” However, the electricity was initially only transported as far as the central Mitte substation in Berlin-Tiergarten – Berlin remained a city with two relatively independent electricity grids.

Bewag worked tirelessly to convert the two existing grids into one. In early 1995 construction work began on a ‘diagonal line’, stretching from West to East Berlin. New substations were constructed in which were then connected to the Mitte substation via an approximately 12-kilometre-long underground cable. The first section of the line, between Mitte and Friedrichshain, was commissioned on 7 December 1998: for the first time since 1952, the two separate power grids were properly reunified.

Reich played a crucial role during this period of transition. As the then head of load dispatch, he was responsible for merging the East and West Berlin control centres. This was a tremendously exciting time for Reich and one which would go on to shape his future career. “Staff members from former East and West Berlin worked exceptionally well together. Our different approaches sometimes led to a few differences of opinion when it came to project implementation, but we complemented each other well and learned a great deal from one another,” he says. “Although our technologies were at different stages of development, we all possessed the same high level of knowledge.”

Strasse also has fond memories of this period. “Of course, some things didn’t go smoothly. We are only human, after all. When we began our joint switch operator training, which was around 1996, switch commands were used constantly. They still are today.” Reich also remembers using these commands: “We mainly used remote controlled systems, but staff in the East regularly had to operate switches manually, which required switch commands, and we ‘Westerners’ had to learn them.” A typical switch command sounded something like this: “In substation Mitte, 380-kilovolt cable substation Friedrichshain, circuit breaker on.”

In November 2000, the fully connected diagonal line that crossed Berlin was commissioned – five years after work on the diagonal line began. Bewag was now fully integrated into the German and European energy grid at two separate points. Strasse, a former East Berliner, now works in the western area of Berlin where he is responsible for around 100 employees as manager of the medium and low-voltage grids in Berlin Mitte. “What took place here in Berlin, what we achieved together, was historic. Our energy supply offers security and reliability that is unrivalled throughout the globe. And our clocks are back to normal, too.”

On the orders of Soviet troops, West Berlin is separated from the city’s electricity grid on 5 March 1952.

On 13 August 1961, barriers are provisionally erected along the border between the Soviet sector and West Berlin. Construction of the Berlin Wall begins.

Fall of the wall

On 1 December 1992, an emergency power line is set up between East and West Berlin.

On 7 December 1994, the grids became connected – but only in the central districts.

Berlin’s power grid is not completely reunified until 7 December 1998.

After 50 years of operation, the Reuter CHP plant's Unit C is now being decommissioned. Through war and peace the site has supplied power and heat to Berlin and it is now making an important...

During work to prepare the Kriegers Flak area for Vattenfall's new offshore wind farm, several artefacts have been found that are believed to date back from the 17th to the 19th century, and...